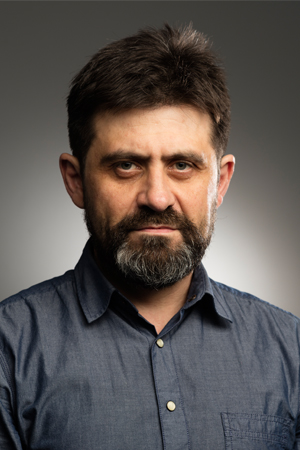 One of the most acclaimed Czech lighting designers, Daniel Tesař received no special education. He began as a worker at the Českomoravská Kolben-Daněk national engineering company. In the early 1990s he worked as an electrician at the newly reopened Prague theatre Za Branou, where he took an interest in specialising in theatre lighting and the possibilities of lighting design. He subsequently appeared as a technician at the Prague Chamber Ballet and in 1998 first appeared as the lighting designer of a theatre production.

Today, Daniel Tesař collaborates with leading Czech theatres, among them the Národní Divadlo (National Theatre) in Prague, the Prague Státní Opera, the National Theatre in Brno, the Archa and Ponec Theatres and the experimental space NoD among others. Takes part in productions at the festivals 4+4 Days in Motion, Dance of Prague and the International Theatre Festival Divadelná Nitra; teaches his profession at seminars in the Czech Republic and internationally.

At the Národní Divadlo in Prague he has designed the lighting for some forty operas and ballets, among them Curlew River and Gloriana by Britten, L’Orfeo by Monteverdi, Rusalka and The Jacobin by Dvořák, Simon Boccanegra by Verdi, Mefistofele by Boito and Parsifal by Wagner, as well as productions of ballets staged there, including works by Balanchine, Robbins and Forsythe (the evening of ballets Amerikana III) among others. He has frequently worked with the choreographer Jan Kodet and the opera director Jiří Heřman. Has collaborated with such stage directors as David Pountney, Sláva Daubnerová, Ondřej Havelka, Arnaud Bernard and Tomáš Pilař among others.

In Russia he has designed for a production of Dvořák’s Rusalka at the Ural Theatre of Opera and Ballet (2017), as well as Shchedrin’s Lolita, brought to the Mariinsky Theatre from Prague’s Národní Divadlo (2020).
Information for January 2020