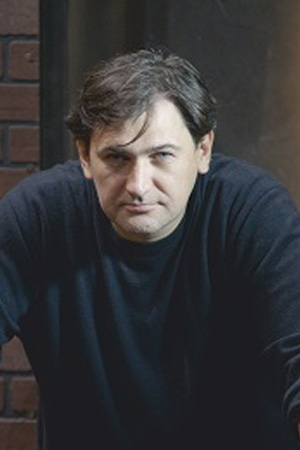 Sergei Skornetsky was born in the town of Severomorsk, Murmansk Region. In 1995 he graduated from the Production Faculty of Moscow Art Theatre School (course taught by Efim Udler).

Has designed for more than sixty productions, among them the dramas The Lower Depths and The Last Ones by Gorki, Bekenntnisse des Hochstaplers Felix Krull by Thomas Mann, Psycho by Minchin, Vieux Carré by Tennessee Williams, Room of Laughter by Bogayev, The Father by Strindberg, It’s Not All Shrovetide for the Cat by Ostrovsky, Sublimation of Love by Benedetti, The Idiot by Dostoyevsky, Les Liaisons dangereuses by de Laclos, The Long Christmas Dinner by Wilder, Arcadia by Stoppard, On the Run by Bulgakov, Synchron by Hürlimann, Der Theatermacher by Bernhard, Little Soldiers by Zherebtsov, Marriage 2.0 after works by Chekhov, The Tempest. Variations after motifs from the play by Shakespeare, Madonna with a Flower after the story Madonna with Rationed Bread by Maria Glushko, Sister Hope after the play Elder Sister by Volodin, The Three Sisters by Chekhov, Emma after the novel Madame Bovary by Flaubert, A Story of a Happy Moscow after the novel Happy Moscow by Platonov and Two Angels, Four People by Shenderovich at the Oleg Tabakov Theatre; La Folle de Chaillot by Giraudoux, The Government Inspector by Gogol, Ornifle by Anouilh and Time and the Conways by Priestley at the Moscow Academic Satire Theatre; Woe from Wit by Griboyedov at the Theatre Association 814; Two Women after the play A Month in the Country by Turgenev and The Lady’s Visit after the play Der Besuch der Alten Dame by Dürrenmatt at the Lenkom Theatre; Talents and Admirers by Ostrovsky, Suitcase Packers by Hanoch Levin, Uncle’s Dream by Dostoyevsky, August: Osage County by Letts, Herr Puntila und sein Knecht Matti by Brecht and Kant by Ivaškevičius at the Moscow Academic Theatre of Vladimir Mayakovsky; Bunin at the Stanislavsky Electrotheatre; and Kabale und Liebe by Schiller, The Petty Demon by Sologub and Orpheus Descending by Tennessee Williams at the Roman Viktyuk Theatre; and the operas Il barbiere di Siviglia by Rossini, Gianni Schicchi, Salome, La Bohème, Madama Butterfly, Carmen, DIDO (DIDO. Prologue by Nyman / Dido and Aeneas by Purcell), The Gamblers by Shostakovich and The School for Wives by Vladimir Martynov and the cantata Babel by Stravinsky at the Kolobov Novaya Opera Theatre of Moscow.

Production designer of the horror musical-opera TODD (2012), which the punk band Korol’ i Shut created on the basis of Christopher Bond’s play about Sweeney Todd.
In 2016 he designed a production of Eugene Onegin for the Latvian National Opera.

Together with stage director Vyacheslav Starodubtsev he has collaborated on productions of Turandot, Aida, Un ballo in maschera, L’elisir d’amore, Mozart and Salieri, Francesca da Rimini, Duke Bluebeard’s Castle, Dido and Aeneas, Kashchey the Immortal, Die Zauberflöte at the Novosibirsk State Academic Opera and Ballet Theatre, Mozart. The Marriage of Figaro at the Mikhailovsky Theatre, Sadko, La Bohème (revival of the production by Federik Mirdita) and Rigoletto at the Glinka Chelyabinsk State Academic Opera and Ballet Theatre.

At the Mariinsky Theatre he has designed for Vyacheslav Starodubtsev’s productions of The Tsar’s Bride (2018, Primorsky Stage), Mozart and Salieri (2019), Kashchey the Immortal (2019) and Tannhäuser (2019).