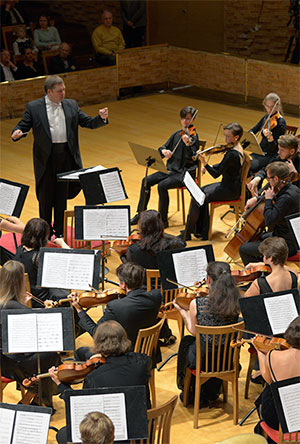 The Symphony Orchestra of the St Petersburg State Rimsky-Korsakov Conservatoire was founded by its first director, Anton Rubinstein, who established classes in orchestra music and ensemble-playing. Rubinstein was later succeeded by Rimsky-Korsakov and Glazunov. When the conservatoire opened its conducting department, it also began its collaboration with the orchestra of the conducting department students. Notable alumni of the department include such renowned musicians as Alexander Melik-Pashayev, Yevgeny Mravinsky, Ilya Musin, Nikolai Rabinovich, Yuri Temirkanov, Valery Gergiev, and Vladimir Chernushenko.

The Symphony Orchestra was revived in 2004, after a long break, to help students practice in an orchestral set-up. Over this period, the orchestra has prepared a number of fascinating concert programmes under the supervision of such conductors as Mariss Jansons, Vassily Sinaisky, Sergei Stadler, Alexander Titov, Alexander Sladkovsky, Alim Shakh, Dmitry Ralko, and Mikhail Golikov. The ensemble performed together with Luciano Pavarotti at his concerts in St Petersburg. It has also performed at various music festivals in Russia, Germany, France, Italy, the Czech Republic, and Lithuania.
Information for October 2018