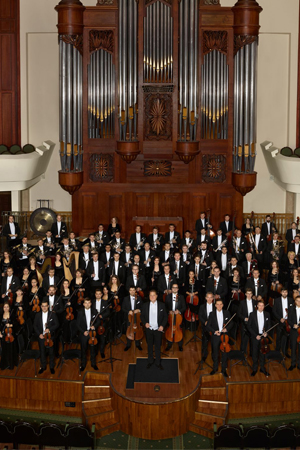 The Tatarstan National Symphony Orchestra was founded in 1966 (at that time it was known as the Symphony Orchestra of the Gabdulla Tuqay State Philharmonia of the Tatar Autonomous Soviet Socialist Republic) on the initiative of Nazib Zhiganov, the dean of the Kazan Conservatoire, and under the management of the conductor Natan Rakhlin, who headed the orchestra up until his death in 1979. The first concert took place in April 1967 at the Tatar Opera and Ballet Theatre.

Following the death of Natan Rakhlin, the ensemble collaborated with Renat Salavatov, Sergei Kalagin, Ravil Martynov and Imants Kociņš, and in 1985 Fuat Mansurov was appointed its Artistic Director and Principal Conductor; he was to lead the orchestra for a quarter of a century. In 2010, following the death of Mansurov, Alexander Sladkovsky became the orchestra’s Artistic Director and Principal Conductor. A new stage in the orchestra’s history had begun. The orchestra has organised international music festivals such as Rakhlin Seasons, White Lilac, Kazan Autumn, Concordia, Denis Matsuev and Friends, Creative Discovery and Miras, as well as the project The Wealth of the Republic for talented pupils at music schools and students at conservatoires, the educational projects Music Lessons with an Orchestra and Magical Strings of the Orchestra for school pupils of Kazan and the charitable project Healing Through Music for those with disabilities and for severely ill children.

Over the years the orchestra has collaborated with such conductors as Mstislav Rostropovich, Vladimir Ziva, Mark Ermler, Mikhail Pletnev, Andrey Boreyko, Yuri Simonov, Vitaly Kataev and Rudolf Nureyev among others.

Concerts featuring the Tatarstan National Symphony Orchestra are held in Moscow, Perm, Orenburg, Irkutsk, Sochi and Tyumen and at the festivals Crescendo, Stars on Baikal, Orenburg Seasons of Denis Matsuev, The Cherry Wood, Hibla Gerzmava Invites…, Opera Apriori, the Tchaikovsky International Arts Festival in Klin, the international piano forum Festival de La Roque-d’Anthéron (France) and the festival La Folle Journée in Nantes (France) and Japan. In 2016 the orchestra performed concerts at the Brucknerhaus in Linz and at the Musikverein in Vienna, and in December 2018 it appeared in China.

In 2012 the ensemble released An Anthology of Music by Composers of Tatarstan and the album Enlightenment (featuring Tchaikovsky’s Manfred symphony and Rachmaninoff’s Isle of the Dead) on the labels Sony Music and RCA Red Seal, while in 2016 with Melodiya it recorded the First, Fifth and Ninth Symphonies by Mahler and all of Shostakovich’s symphonies and instrumental concerti. In May 2020 the Sony Classical label released the box set Tchaikovsky 2020 commemorating one hundred and eighty years since the composer’s birth – a recording of all of Tchaikovsky’s symphonies and instrumental concerti. In August 2020 the Tatarstan National Symphony Orchestra under the direction of Alexander Sladkovsky recorded symphonic works by Rachmaninoff on the Sony Classical label. Presentation concerts of the box set Sergei Rachmaninoff. Symphonic Collection will be held in March 2021 in Moscow, St Petersburg and Kazan.
Information for March 2021