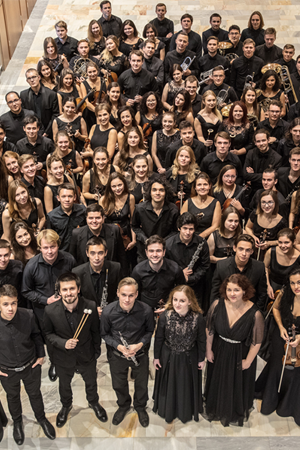 The Russian National Youth Symphony Orchestra (RNYSO) was established in September 2018 with the support of the Foundation of Presidential Grants and the Ministry of Culture of the Russian Federation and is being developed under the auspices of the national project “Culture”. The Moscow Philharmonic Society has adopted the role of curator.

Following the results of the 1st All-Russian Competition for Symphony Orchestra Artists, the RNYSO accepted one hundred instrumentalists aged up to thirty from twenty-eight towns and cities throughout Russia; the ensemble currently numbers one hundred and eight musicians.

In the course of its first season (2018–19) the RNYSO presented forty concerts in thirteen Russian towns and cities, among them St Petersburg, Irkutsk, Vologda and Nizhny Novgorod. The ensemble has performed at the Moscow Philharmonic Society, the Great Hall of the Moscow Conservatory, the Great and Small Halls of the State Kremlin Palace, the Mariinsky Theatre and on Red Square and has participated in the festivals Stars of the White Nights, Stars on Baikal, Rachmaninoff Days and Russian Winter.

The orchestra focusses great attention on educational programmes, in particular through its appearances at Russian institutions of higher education. The RNYSO’s first concerts in fact took place in student auditoriums of the Russian State University of Cinematography (VGIK) and the Moscow State University; the ensemble has performed at numerous universities throughout Russia (in St Petersburg, Tomsk, Omsk, Kemerovo, Nizhny Novgorod, Krasnoyarsk, Perm, Vologda and Cherepovets). The orchestra participates in the Moscow Philharmonic Society’s special projects Mum, I’m a Music-Lover and The Language of Music. These instructive concerts have featured the young conductors Dimitris Botinis and Alexei Rubin and the music historian Yaroslav Timofeyev.

Autumn 2020 will see a series of major European performances by the RNYSO. In late November the orchestra will be taking part in the grand closing concert of the Russian Seasons in Luxembourg and France. On 30 November the RNYSO will be appearing at the Philharmonie de Paris under the baton of Valery Gergiev together with the soloists Alexandre Kantorow (piano) and Sergei Dogadin (violin) who were winners at the XVI International Tchaikovsky Competition.
Information for August 2020