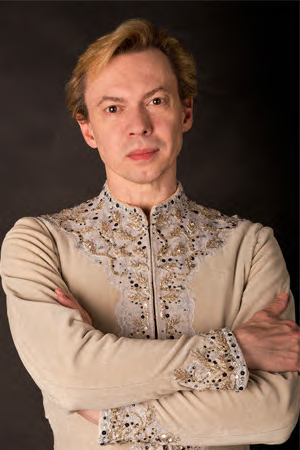 Born in Krivoi Rog (Ukraine).
In 1986 he graduated from the Moscow School of Dance (class of Professor Pyotr Pestov) and joined the Moscow Classical Ballet directed by Natalia Kasatkina and Vladimir Vasiliev. As a principal dancer of the company he performed roles in ballets in the classical repertoire including Giselle (Albrecht), Swan Lake (Prince Siegfried), Don Quixote (Basilio, Gamache), George Balanchine’s ballet Theme and Variations, Natalia Kasatkina and Vladimir Vasiliev’s production of The Creation of the World (Adam) and Romeo and Juliet (Romeo, Mercutio), while he was also the first performer of lead roles in many of the theatre directors’ own productions.

In 1992 he was appointed a Principal Dancer of the Wiener Staatsoper where he danced lead roles in Mikhail Baryshnikov and Elena Chernysheva’s Don Quixote, John Neumeier’s A Midsummer Night’s Dream, Kenneth MacMillan’s Manon, Rudolf Nureyev’s production of Swan Lake, George Balanchine’s Apollo and Yuri Grigorovich’s The Nutcracker.
From 1994 he was a soloist with the National Ballet of Canada, where his repertoire included lead roles in the ballets Giselle and Swan Lake staged by Erik Bruhn.
In 1995 Vladimir Malakhov made his debut with American Ballet Theatre, where the dancer’s repertoire expanded to include lead roles in Michel Fokine’s Chopiniana, Natalia Makarova’s production of La Bayadère, Harald Lander’s Études, Twyla Tharp’s Haydn Variations and Nacho Duato’s Remanso and Without Words. Vladimir Malakhov has performed with the ballet companies of the Opera di Roma, the Berliner Staatsoper, the Tokyo Ballet and the Stuttgart Ballet. His repertoire includes both classical ballets and 20th century masterpieces as well as an entire plethora of productions created for Vladimir Malakhov by Sasha Waltz, Patrice Bart and Mauro Bigonzetti.

As a choreographer Vladimir Malakhov made his debut in 1999 when he presented his version of La Bayadère at the Wiener Staatsoper (in 2002 this production was staged at the Berliner Staatsoper). In 2001 in Vienna came the premiere of Malakhov’s production of Verdi-Ballet: The Masked Ball to music by Giuseppe Verdi. From 2004-2014 Vladimir Malakhov directed the Berliner Staatsballett (until 2004 the Ballet Company of the Berliner Staatsoper), for which he created productions of the ballets Cinderella" (2004), The Sleeping Beauty (2005) and La Péri (2010). From 2014 until 2016 Vladimir Malakhov has combined the duties of Artistic Advisor of Tokyo Ballet with performances and choreographic stagings around the globe. For Zagreb National Theatre he staged Swan Lake (2017) and The Nutcracker (2019), at the Kosice National Theatre he presented Swan Lake (2018), for Kiev Ballet School he staged Coppélia (2018).
Information for July 2021