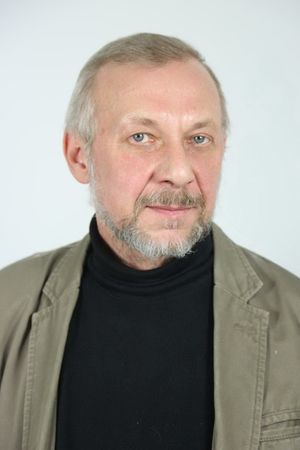 Graduated from the theatre design department of the Leningrad Serov Art School (now the St Petersburg Roerich Art School).
From 1979–1983 he worked at the national Academic Bolshoi Theatre of Opera and Ballet in the Republic of Belarus. As a production designer he worked on Die Erwählung eines Kapellmeisters, La serva padrona and Flower Festival in Genzano, and as an assistant to principal designer Yevgeny Lysyk he was involved in productions of Sartacus and The Nutcracker. In the opera studio of the Belorussian State Conservatoire, as a production designer he created I pagliacci and Le nozze di Figaro.

Since 1983 he has worked at the Mariinsky Theatre, being a key specialist in painting and technological processes. Has taken part in the creation of over one hundred productions as a model designer and assistant production designer. As a production designer at the Mariinsky Theatre he has staged productions of Parsifal (1997), La forza del destino (1998) and The Sleeping Beauty (1999). As an assistant designer to Mihail Chemiakin he worked on productions of The Nutcracker (2001), Princess Pirlipat, or Worthiness Punished (2003), The Magic Nut (2005), Metaphysics, The Meek One and Le Sacre du printemps (2006).

Produces graphics for books, easel paintings and works in the genre of theatre poster design. As a designer at the National Art Museum of the Republic of Belarus he designed the international exhibition project The Times and Art of Léon Bakst (2016). The designer has had personal exhibitions both in Russia and internaationally. The designer’s works feature in the collections of the Museum of the History of St Petersburg, Russian art museums and private collections in the USA, France, Latvia, Lithuania and Finland. Member of the St Petersburg branch of the Union of Artists of Russia.
Information for October 2018