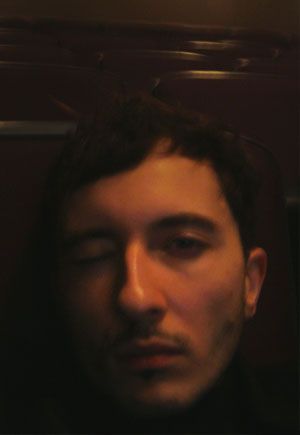 Graduated from the Faculty of Cinematography, Animation and Special Effects of the National Film School, Łódź, in 2004. Assistant to Professor Jozef Robakowski at the National Film School in Łódź since 2004.
In his video and lighting projects, his main inspiration comes from the rhythm of nature. The light and video installation 1. Garden (Outdoor) was shown during The Time Loops group exhibition in Łódź and at the Łódź Art Museum (during the Attention: LIGHT! exhibition as part of the arts project and festival Jozef's R. Mirages), and it also forms the main part of the set design in the production based on Yukio Mishima's play LINCZ directed by Agnieszka Olsten for the National Polish Theatre in Wrocław. The two-screen video installation 2. Romanticism was shown on twenty-four hour loop at the National Polish Theatre in Wrocław.
His latest work - the abstract, non-linear video feature INSTANT (2008) - was shown at the ENTROPIA Gallery in Wrocław (individual exhibition INSTANT video and Polaroids), at the Leto Gallery in Warsaw (2009) and the gallery of Stefania Pigi Vaselli and the Istituto Polacco in Rome (Transfert group exhibition). After this month-long show, Emily Verla Bovino of London's prestigious FRIEZE wrote: "Instant [...] is artist Wojciech Puś' visionary account of Bauman's ‘liquid modernity': a hypnotic panorama of the still and the fleeting, the patient waiting and the alert capturing behind each lived moment..."
Currently Wojciech Puś is working on his installation, light and video based multimedia PhD Degree and his new video feature and installation entitled 3. Ditto, ditto...
He works in Poland's foremost theatres as a lighting designer and video artist with some of the country's most interesting directors (Agnieszka Olsten, Paweł Miśkiewicz and Marek Fiedor). ALEKO. IOLANTA directed by Mariusz Treliński at the Mariinsky Theatre marks Puś' debut in the opera.
Information for 2009