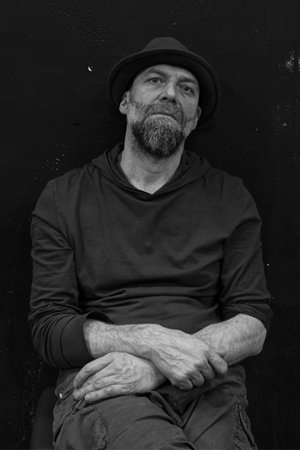 In the 1980s he took part in the creation of productions for Boris Ponizovsky’s DaNet theatre. In 1989 together with Vadim Vasiliev and Maxim Isaev he formed the group AKHE, with which the realisation of all of Pavel Semchenko’s creative projects has been connected ever since to some degree or another. The range of these projects is incredibly broad: installations, sculpture, wall paintings in public institutions, films, performances, exhibitions, illustrations and even dance. Since 1996 AKHE’s activities have been more closely associated with theatre, and Pavel Semchenko has appeared with the group at numerous festivals in Russia, Europe, Asia, America and Australia.

Participant in joint projects with the DEREVO theatre and Anton Adasinsky, creator of productions at the New Stage of the Alexandrinsky Theatre, the Tovstonogov Bolshoi Drama Theatre, the Lensoviet Theatre, the Satire Theatre on Vasilievsky Island, the Bryantsev Youth Theatre, the Bolshoi Puppet Theatre, Priutkomedianta Theatre and theatres in Hamburg, Salzburg, Glasgow and Tel Aviv.

Works in recent years include directing and designing a production of The Measure of Bodies for the Provincial Dances theatre, the set designs for the musical Zombie-Zombie-Zombie, the lighting for Maxim Didenko’s productions of The Backbone Flute, Red Cavalry, Kharms. Myr, The Overcoat. A Ballet, The Idiot, I Am Here and Little Tragedies, directing, designing and performing In the Frame (together with Vladimir Volkov and Vladimir Varnava), designing the sets and the costumes for the ballet Les Noces at the Perm Opera and Ballet Theatre (production by Anton Adasinsky, conducted by Teodor Currentzis), supervising the artistic direction of the project The Composition of the World (performance-production-concert-installation) and designing the sets and video content of the music and dance production Collider (Form festival, Moscow), directing and designing the production Mramor at Osobnyak Theatre, as well as productions of L’Écume des jours, White Cabin, Mr Carmen, GOBO, a Digital Glossary, Fluff and Dust, Wet Wedding, Catalogue of the Hero and other AKHE theatre productions.
Information for November 2020