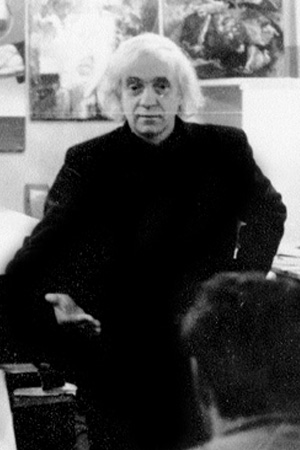 The outstanding Ukrainian set designer Yevgeny Nikitich Lysyk was born in 1930 in the village of Shnyrev, now the Zolochevsky District of Lviv Region in Ukraine. Studied at the Lviv Institute of Applied and Decorative Art, where the renowned Ukrainian painter Roman Selsky was then teaching. In his fourth year of studies, he was sent down from the institute in connection with the developing campaign against "formalism", and one year later he was re-enrolled. Even before graduating from the institute he had begun to work in the set department of the Ivan Franko Lviv State Opera and Ballet Theatre, where he trained under Fyodor Nirod. In 1961 the young graduate joined the Lviv Opera and Ballet Theatre. In his first year of employment at the theatre he designed three productions. The young set designer's debut work was Yuri Biryukov's one-act ballet A Suite about Cosmonauts, and his talent was particularly noticed in his designs for the ballet Boléro to music by Ravel. From 1967 until his death Yevgeny Lysyk was the theatre's Principal Designer. For the Lviv stage he designed around forty productions.

Lysyk's outstanding works from the 1960s include the ballet Spartacus, the premiere of which was conducted by its composer Aram Khachaturian (1965). Even then, the Lviv set designer had begun to receive invitations from other theatres. In 1967 the Kiev Academic Anatoly Shekera Opera and Ballet Theatre staged Arif Melikov's The Legend of Love featuring sets by Lysyk; the designer subsequently repeated his designs for that ballet in 1971 in Lviv and in 1973 in Yugoslavia. Another major work in that decade was Prokofiev's ballet Romeo and Juliet, staged in Lviv by Mikhail Zaslavsky (1968). In 1970 there came the premiere of Boris Lyatoshinsky's opera The Golden Hoop, for the designs of which Lysyk received the State Prize of the Ukrainian SSR (1971). For the grandiose sets of the opera Boris Godunov, staged in Kiev in 1971, he produced over four thousand square metres of painting and designed hundreds of costumes. Lysyk's set designs for Andrei Petrov's ballet The Creation of the World (1972) proved to be a masterpiece. As well as at his home theatre, the designer also staged the work at the State Opera and Ballet Theatre of the Byelorussian SSR in collaboration with the young choreographer Valentin Yelizarev (1976). The Minsk theatre also saw the staging of Sergei Kortes' opera Giordano Bruno (1977, directed by Semyon Shtein). At several theatres, Lysyk designed Yevgeny Glebov's ballet Till Eulenspiegel: in 1975 in Lviv, in 1977 at the Kirov (Mariinsky) Theatre in Leningrad and in 1978 in Minsk. At the Byelorussian Bolshoi Theatre, Lysyk and Yelizarev – in addition to the legendary The Creation of the World – staged the ballets Spartacus (1980) and The Nutcracker (1982). The set designer's most significant works also include productions of the operas War and Peace, Macbeth and Tannhäuser and the folk-opera When the Fern Blooms. In Odessa in 1984 Lysyk took part in Vitaly Gubarenko's new opera-ballet Viy; this dazzling production was performed to packed auditoriums for eight seasons.

Yevgeny Lysyk also worked in the cinema industry, being part of the design team for the film Prince Daniil Galitsky (1987). The designer was invited to work at theatres in Turkey, Yugoslavia, Poland and Czechoslovakia; he also collaborated with the Sverdlovsk Academic Opera and Ballet Theatre and the Chelyabinsk Academic Opera and Ballet Theatre.
In 1975 the set designer was awarded the title of People's Artist of the Ukrainian SSR.

At the Kirov (Mariinsky) Theatre, in addition to Till Eulenspiegel Yevgeny Lysyk also designed a production of Don Giovanni (1987). His sketches were brought to life in a production of the opera Lohengrin (1999). Audiences can also see the brilliant Ukrainian artist's sets in Parsifal (1997). The designer's monumental Wagnerian sets were typified by a unique Gothic flavour that may be seen in many of his works, among them Swan Lake, La Esmeralda and The Nutcracker.

Since Lysyk's death, Tadei Ryndzak and the designer's wife Oxana Zinchenko have worked using his designs at the Mariinsky Theatre.
Information for February 2021