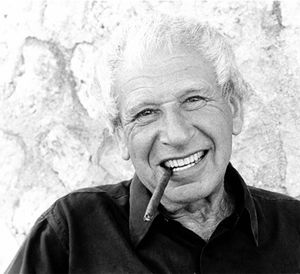 Ralph Koltai is a generally acknowleged as a leading innovator of British theatre design. He has designed over 200 operas, plays, ballets, musicals at home and abroad.

He was born in Berlin of Hungarian descent and came to England in 1939 where he took Graphic Design evening classes at Epsom School of Art from 1942–44. He joined the British Army RASC in 1945 and was transferred to the Intelegence Corps attached to the Military Tribunal at Nurenberg.
He studied Stage Design at Central School of Art and Design between 1948–51.
He started work as a freelance stage designer in 1950, working almost exclusively in opera 1950–62 (Royal Opera, Sadler´s Wells, Scottish Opera, Welsh National Opera, English Opera Company). He became Associate designer for the RSC 1963–66, and since 1976 has worked with Ballet Rambert, the National Theatre and internationally. He was Associate Designer at the Central school from 1965–73.

He has experimented with a wide variety of techniques: productions frequently require careful engineering as well as elegant sculptural forms. He now travels all over the world attending exebitions of his work and designing for internationally-renowened companies.
Among a string of awards, Ralph Koltai was made a CBE in 1983, and is Fellow at The Academy of Performing Arts, Hong Kong, St Martin´s College of Art and Design, London and Rose Bruford College, Kent.