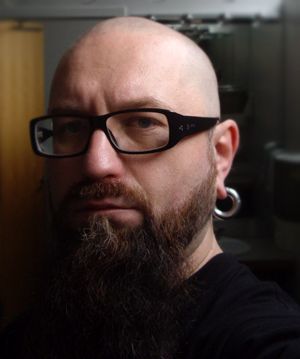 Born in 1965 in Leningrad. From the age of eleven he attended an arts school where his teachers included members of Leningrad’s renowned Hermitage art group. In 1980 he entered the industrial graphics department of the Leningrad Serov Arts School (today the St Petersburg Roerich Fine Arts School). In 1986 he met the acclaimed practical joker and theoretician Boris Ponizovsky and became a member of his legendary theatre company DA-NET (YES-NO). Under the guidance of Ponizovsky, in 1989 together with the artists Pavel Semchenko and Vadim Vasiliev he founded the AKHE group of which he is still a member today. He has worked on productions (together with Pavel Semchenko and the actress and director Yana Tumina) of White Cabin, Pookh&Prakh, Sine Loco, Wet Wedding, Plug-n-Play, Faustі. 2360 Words, Gobo. Digital Glossary and Catalogue of the Hero. He has written the plays Posthumous Composition by Dr Faust Written in His Own Hand, Solesombra, The Gardeners, The Last Four Things, Circo Ambulante and Uchella Cheka. In 2003 the production Sine Loco was awarded Russia’s national theatre prize the Golden Mask in the category “Best Innovation”. He has been shown at many Leningrad-St Petersburg exhibitions, and with AKHE in particular he has appeared at all major theatre festivals in Russia and abroad. AKHE has been a partner for projects of Slava Polunin, DEREVO theatre, the Formalny Theatre, the Lantaren Theatre (The Netherlands), the Toihaus (Austria), the Projekt Theater (Germany), the Teatr Kana (Poland), the Bolshoi Puppet Theatre (St Petersburg) and the Alexandrinsky Theatre (St Petersburg).
Since 2009 he has worked with the Mariinsky Theatre (Set Designer and Costume Designer of the ballet The Little Humpbacked Horse).