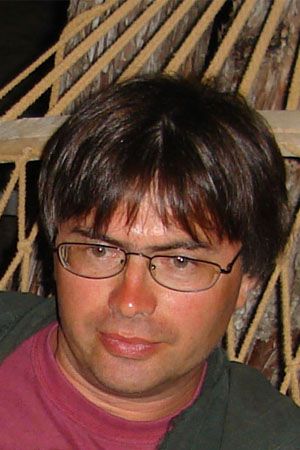 Oleg Golovko graduated from St Petersburg´s Repin Institute of Painting, Sculpture and Architecture (course taught by E. Kochergin). Trained in Paris and has taken part in numerous international events and arts exhibitions. Between 2002 and 2004 he was Principal Designer of the Altai´s Shukshin Drama Theatre, and from 2004-2006 he was Principal Designer of the Red Flare Novosibirsk State Theatre. Member of the art group Dustmen (graphic performances, moving objects, photographs, painting, graphics). Has designed over fifty productions. They include: Mavra and Iolanta for the St Petersburg Rimsky-Korsakov Conservatoire Theatre of Opera and Ballet; The Forest, Richard III, The Servitude of Sanctimonious People, Macbeth, The Queen of Spades and Fatal Number at the Red Flare Theatre; The Watchman, The Magnanimous Cuckold, Romeo and Juliet, The Nutcracker, Generals of Sandy Careers, The Seagull, Heart of a Mongrel, The Queen of Spades, Wozzeck and Enough Simplicity for any Wise Man at the Altai´s Drama Theatre; Old-World Landowners at the National Theatre of Karelia; Love´s No Joke, The Pickwick Club and The Importance of Being Earnest at the Omsk Drama Theatre; The Taming of the Shrew at Yekaterinburg´s Young Spectators´ Theatre; and Lerka at the Baltic House Theatre.