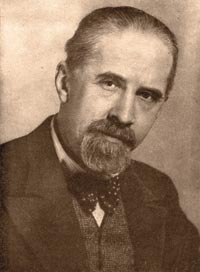 Born on 4 (16) August 1876 in the village of Tarkhovka (close to St Petersburg) into the family of an army medical officer. Graduated from the law faculty of the St Petersburg University. In 1898 he trained in the workshop of the artist Anton Aschbe in Munich and subsequently under Ilya Repin for several years at Maria Tenisheva´s workshop-school. Later he became involved in the World of Art union.

Bilibin vividly demonstrated his artistic prowess in his illustrations for Russian fairytales and bylinas, as well as in works for theatre productions. He devoted his career to the Russian fairytale theme, having acquainted himself thoroughly with the genre: he travelled a great deal throughout Russia, especially in the North, studying Russian folk and decorative art with interest. Bilibin was often commissioned to create sets for productions based on Russian fairytales or ancient Russia. He designed Rimsky-Korsakov´s operas The Golden Cockerel (1909) and Sadko (1914) and Glinka´s Ruslan and Lyudmila (1913) and became a renowned theatre artist.

At the height of the Revolution, in autumn 1917 Bilibin left Petrograd for the Crimea and in early 1920 he succeeded in reaching Egypt. Initially he lived in Cairo then later in Alexandria where he designed ballet productions for Anna Pavlova´s company, as well as producing sketches for murals for an Orthodox church. In 1925 he moved to Paris where he worked intensively, designing ten productions and produced illustrations for folk tales, including French fairy stories.

In 1936 Bilibin returned to Russia and was well received. He was made a professor in the graphics workshop of the Institute of Painting, Sculpture and Architecture in Leningrad, and in 1939 he became a doctor of art history. At the same time he designed a lavish production of The Tale of Tsar Saltan (1937) for the Kirov Theatre and created illustrations for Alexei Tolstoy´s novel Peter I (1937) and Mikhail Lermontov´s Song about Kalashnikov the Merchant (1939).

Bilibin died during the Siege of Leningrad on 7 February 1942. He is buried in the communal grave of professors of the Academy of Arts near the Smolensk Cemetery.