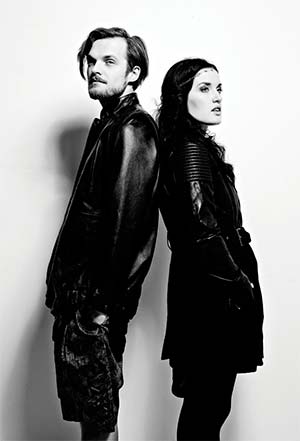 These Riga artists have worked as the MAREUNROL'S design duo since 2006. In 2009 they were winners at the XXIV Festival of Fashion and Photography in Hyères (France), receiving both top awards – the Grand Prix L'Oréal and the 1.2.3 Prize. Have taken part in the Prague Quadrennial of set design and theatre architecture, the Arnhem Mode Biennale in The Netherlands, fashion weeks and exhibitions in France, Italy, Japan, Denmark, Chile, Spain and Russia among other countries. They have twice been recognised as the best designers in Latvia (2006 and 2007). MAREUNROL'S became the first Latvian brand to participate in the official programme of Paris Fashion Men's Week. In collaboration with the MADE arhitekti group Mārīte and Rolands came up with the concept and architectural solution for the Latvian Pavilion at the Expo 2015 universal exhibition in Milan. Their works are on display and stored at the Latvian National Museum of Art. The duo was included in the short-list of the prestigious International Woolmark Prize for 2016–2017. The designers' first work in theatre was the costumes for a production of A Clockwork Orange by the Latvian National Theatre, which received the country's Spēlmaņu nakts theatre award (2006). They have created the costumes for two stage versions of Eugene Onegin – one by Andrejs Žagars at the Latvian National Opera and another by Andriy Zholdak at the Mikhailovsky Theatre (for their work on the latter production they were nominated for a Golden Mask award). At the Latvian National Opera they have also worked on productions of Mikhail and Mikhail Play Chess, Rienzi. Rise and Fall and Macbeth (2016).