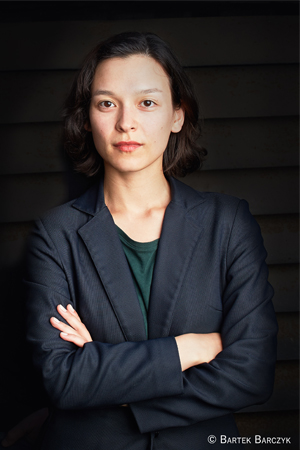 Natalia Kitamikado is a polish-japanese designer whose practice ranges from product design to scenography and costume design in opera, theatre, dance and film. After studies at the École nationale supérieure des Arts Décoratifs in Paris and the Academy of Fine Arts in Warsaw, she assisted a renown scenographer Boris Kudlička with whom she co-designed numerous operas in 2012–2019, such as: Iolanta, Bluebeard’s Castle, Tristan und Isolde, Salome, Powder Her Face (directed by Mariusz Treliński), Elektra (directed by Keith Warner) and others.

After her first solo work in 2015 (Baby Doll, Teatr Studio, Warsaw), she continues creating visual spaces and costumes, most recent amongst them are Penderecki’s children-opera The Bravest Knight, costumes in open air production Verdi’s Nabucco for the Wrocław Opera, scenography in Rossini’s Il Barbiere di Siviglia for the Kraków Opera, costumes in Prokofiev’s Love for Three Oranges and Shchedrin’s Lolita for the National Theatre in Prague. Parallelly to big-scale productions she works on experimental opera and dance projects with emerging artists and festivals, such as the Nuit Blanche in Bruxelles, the Opera Rara Festival (Kraków).
Information for January 2020