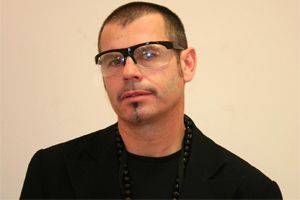 Chu Uroz studied at the School of Architecture in Barcelona and at the El Vallè School of Architecture, specialising in the field of industrial design at the Elisava School of Design. In 1971, he won four prizes for his design of a motorcycle. In 1985 he began working for the companies Basi and Lacoste S A and joined Armand Basi-Barcelona as a designer of men’s fashion.
In 1992 he took part in preparations for the opening ceremony of the Barcelona Olympic Games and he has also worked as a designer and production designer of the film Jamón, jamón. In 1998 he worked with William Flores, as a result of which he received three Laus prizes for working on the creation of the catalogues Dinamo, Blue Moon and William Flores. He has worked with the group U2 as a special consultant on stage and costumes, and received the Peseta de Oro prize for his conceptual work on the Barcelona Olympics. Another of Chu Uroz’ works has been the design of Bigas Luna’s film Huevos de oro and the creation of the FUSE NO. 8 interface programme of experimental graphic design, which won an award from the United Kingdom’s Royal Academy (Graphic Arts). In 2000, he created the designs and costumes for several of La Fura dels Baus’ opera productions. In 2001 his works were presented at a multimedia exhibition organised and run by the Michelin Foundation, as well as at the grand opening ceremony of the Valencia Biennale. He worked as a designer on the films Comedias bárbaras, Gaudir Nouvelle and Yo soy la Juani. In 2007 he received the Abbiati prize for his work on productions of Das Rheingold and Die Walküre at the Palau de les Arts Reina Sofía in Valencia.