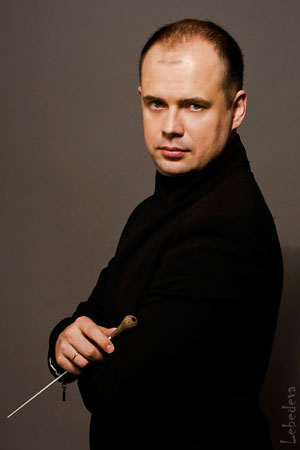 Arseny Shuplyakov was born in Leningrad in 1982. In 2005 he graduated from the St. Petersburg Conservatory (percussion class of Sergei Antoshkin). Since 2015 he has also studied at the conducting class of the conservatory with Vladimir Altschuler.

Since 2000 he has appeared with the Mariinsky Orchestra (assistant solo timpani), and from 2013–2016 he was a solo timpanist. Together with the orchestra under maestro Gergiev he has toured to over thirty countries.

In 2005 together with Vladislav Ivanov he formed the Renaissance Percussion ensemble. In 2005 and 2012 with the ensemble he was a prize-winner at the International Rachmaninoff Competition.

At his initiative the Mariinsky Wind Ensemble was created in 2017.

In May 2017 he made his debut as an opera conductor at the Concert Hall of the Mariinsky Theatre with the world premiere of Vyacheslav Kruglik’s opera The Speculator. In 2018 he was stage director and conductor of Stravinsky’s ballet Pulcinella and in 2019 of Jeu de cartes, both choreographed by Ilya Zhivoi. His ballet repertory also includes Les Noces, Carmen Suite and Le Jeune Homme et la Mort, Le Parc and Concerto for contrabass.
He also collaborates with Vaganova Academy of Russian Ballet conducting its final graduation performances at the Mariinsky.

In 2019, Arseny Shuplyakov was a prize-winner at the VI International Conducting Competition in Nur-Sultan and in June 2019 conducted the orchestra during the final round of the International Tchaikovsky Competition (brass category).