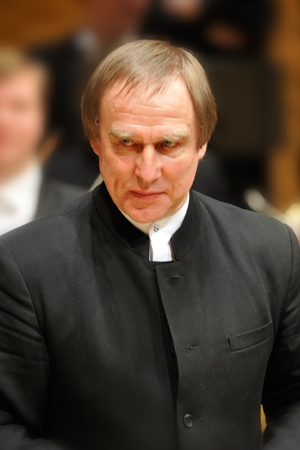 Sergey Roldugin was born in 1951. At the age of five he began to study the piano and, at the age of eight, he took up the cello. Graduated from the Riga School of Music (1970) and later from the Leningrad Conservatory (1975, class of Anatoly Nikitin). There he also undertook a trainee assistantship.

As a student he joined the Leningrad Philharmonic Orchestra. In 1984 he became first soloist and leader of the cello section in the Mariinsky Orchestra. Prize-winner at the Prague Spring International Cello Competition (3rd prize and Bronze Medal, 1980).

Since 2004 he has worked as a conductor. He appears in Moscow, St Petersburg and Novosibirsk in Russia as well as abroad in Germany, Finland and Japan. Guest conductor of the Mariinsky Theatre.

The musician’s expansive solo and orchestral repertoire includes works from various eras and styles. He has recorded extensively for radio and television.

Each year he runs series of master-classes in Russia, Europe, South Korea and Japan. He is actively involved in the work of the juries of various Russian and international competitions. In May 2016 he took part in a concert with the Mariinsky Orchestra in Palmyra (Syria).

Sergey Roldugin’s engagements for the 2018–19 season include concerts in the St Petersburg Music House, the House of Journalist in St Petersburg and the Great Hall of the Sirius Science and Art Park in Sochi.