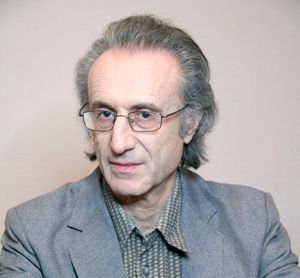 From 1976–1979 he was a conductor of the Voronezh and Yekaterinburg State Symphony Orchestras.
From 1979–1984 he was Artistic Director and Principal Conductor of the State Academic Saratov Philharmonic Orchestra.
From 1986–1988 he was a conductor of the St Petersburg Chamber Opera Company.
Since 1989 he has been a conductor at the Mariinsky Theatre. There he conducts works including Otello, The Love for Three Oranges, The Gambler, Kashchei the Immortal, Ruslan and Lyudmila, The Fiery Angel, Boris Godunov, Betrothal in a Monastery, Semyon Kotko, Il barbiere di Siviglia, Salome and Giselle.
Has performed with the St Petersburg and Moscow Philharmonic Orchestras on numerous occasions (with soloists including Leonid Kogan, Mikhail Vaiman, Vladimir Spivakov, Viktor Tretyakov, Olegh Kagan, Vladimir Viardo, Vladimir Feltsman, Natalia Gutman, Dmitry Bashkirov, Elisso Virsaladze and Nikolai Petrov).
Together with the Mariinsky Theatre and as a guest conductor he has toured to Germany, Scandinavia, Italy, the USA, France and Portugal.
In 1999 and 2000 at the Mariinsky Theatre as well as at the St Petersburg and Moscow Philharmonic Halls he gave concert performances of the operas Dido and Aeneas, Orfeo ed Euridice, Cavalleria rusticana, Nabucco, Samson et Dalila, I pagliacci, Les Pêcheurs de perles, Ariadne auf Naxos and Norma.

In the 2000–2001 season at the opera festival in Kuressaare (Saaremaa Island, Estonia) he staged productions of La sonnambula and Il barbiere di Siviglia featuring Mariinsky Theatre soloists, the KLASSIKA orchestra and the Concert Chorus of the Academic Musorgsky Opera and Ballet Theatre.
In the 2005–2006 season he was the Music Director and conductor of a series of productions at the National Opera House in Vladikavkaz.
Teaches opera and symphony conducting at the St Petersburg Conservatoire.