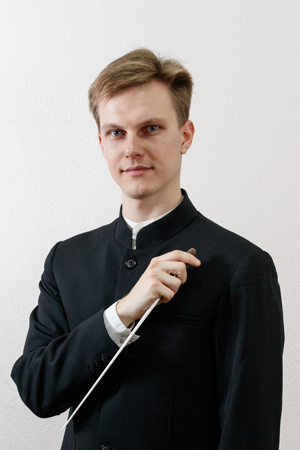 Andrey Kolyasnikov was born in Yekaterinburg in 1992. In 2019 he graduated from the Ural State Musorgsky Conservatoire having specialised in “artistic management of the symphony orchestra” and “conductor of folk instruments” (class of Vyacheslav Kartashov) and “instrumental performance” (class of Viktor Romanko).

Trained under Felix Korobov at the Stanislavsky and Nemirovich-Danchenko Moscow Music Theatre and the Tchaikovsky Moscow State Conservatory. Participant in All-Russian Masterclasses for Young Conductors given by Professor Yuri Simonov in Moscow (2018 and 2019) and masterclasses conducted by Fabio Mastrangelo, Nicolás Pasquet and Grigor Palikarov.

Prize-winner at the 3rd All-Russian Music Competition, specialising in “opera and symphony conducting” (Moscow, 2019). Grant recipient of the New Names foundation and recipient of a Mark Paverman Grant.

From 2015 to 2019 he worked as a teacher and conductor, later also being director of the Symphony Orchestra and Wind and Percussion Instruments Orchestra of the Ural Specialised Music School (College). In 2018 the symphony orchestra under the baton of Andrey Kolyasnikov was awarded the Grand Prix at the 20th International Festival of Ancient Art Bosporus Agons (Kerch).

From 2017 to 2019 he was employed at the Ural Conservatoire, where he directed the Symphony Orchestra and taught at the Faculty of Orchestra Conducting.

Has collaborated with the Yekaterinburg State Academic Opera and Ballet Theatre (as assistant to conductor Oliver von Dohnányi he took part in a production of the opera Turandot).

Since 2019 he has been an assistant conductor with the Moscow Philharmonic Orchestra.
Collaborates with the St Petersburg Music House.
Information for January 2022