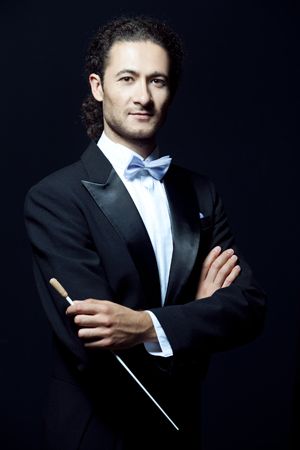 Dimitris Botinis was born in Moscow in 1986 to the family of conductor Dimitris Botinis Sr. At the age of five he began to play the violin, followed by the viola and guitar. In 2006 he graduated from the Municipal Conservatory of Patras in Greece (violin class). Under Yuri Simonov he studied conducting, initially taking masterclasses in Hungary and subsequently at the Rimsky-Korsakov St Petersburg State Conservatory from which he graduated with distinction in 2011.

In 2006 he won 1st prize and two special prizes at the Antonio Pedrotti International Conducting Competition in Trento (Italy). In 2010 he made his debut as an opera conductor at the Opera and Ballet Theatre of the St Petersburg Conservatory (Tchaikovsky’s Iolanta). In 2011 he won 1st prize at the All-Russian Music Competition in Moscow. Since 2011 he has been an Assistant Principal Conductor of the Moscow Philharmonic Orchestra.

In 2012 he began to appear with the Mariinsky Orchestra and to work with the St Petersburg Music House. Since 2015 he has been Principal Conductor of the Safonov Academic Symphony Orchestra of the North-Caucasian State Philharmonic named after V.I. Safonov.

Has taken part in the festivals Musical Olympus (2011–2013), Stars on Baikal (2019) and the Patras International Festival (2010–2011). In November 2014 he conducted the first (“test”) symphony concert at the Rachmaninoff Concert Hall (Philharmonia-2), while in January 2017 he conducted the orchestra at the hall’s official grand opening, at which Denis Matsuev performed Rachmaninoff’s Second Piano Concerto.
In 2017 following a commission from Bayerische Rundfunk he recorded various works by Russian composers together with the Bamberger Symphoniker.
Information for January 2021