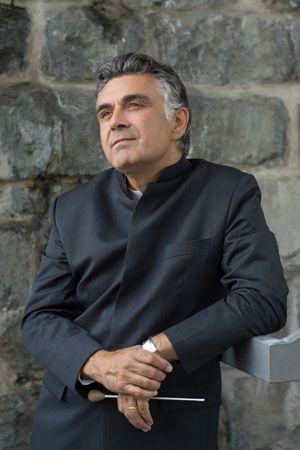 Mischa Damev was born in 1963 in Sofia. He began to study music under the tutelage of his grandfather, the Bulgarian conductor Mihail Lefterov. At the age of ten he and his family relocated to Switzerland. In 1986 he graduated from the department of piano studies at the Hochschule für Musik in Basel, subsequently studying under Alexis Weissenberg in Paris and under Nikita Magaloff in Geneva.

On the advice of Mariss Jansons, in 1991 he abandoned his career as a concert pianist and began to study orchestral conducting. He took an intensive course in Vienna under Karl Österreicher. Following his successful debut with the Bulgarian National Radio Symphony Orchestra, he spent several years working as an assistant to Georges Prêtre and Vladimir Fedoseyev.

From 1990 to 1999 he was Artistic Director of the Orpheum International Festival for Young Soloists in Zurich, while between 1992 and 2007 he directed the Lilienberg Foundation’s Piano Festival and was Director of the Lilienberg Foundation Art and Culture Division. In 2000 he became a trustee of the Master Prize International Competition for Contemporary Symphony Music in London. Since 2007 he has directed the Kulturprozent-Classics programme of the Swiss company Migros.

In 2018 he appeared with the Russian National Orchestra at the Zaryadye Concert Hall in Moscow. That same year, he was a jury member of the Nutcracker international TV competition for young musicians. Since January 2019 he has been Artistic and General Director of the Septembre Musical festival, held in Montreux and Vevey (Switzerland).

Collaborates with the recording company Decca and takes part in radio and TV broadcasts on Swiss TV and Bulgarian and Russian radio stations.
Information for December 2019