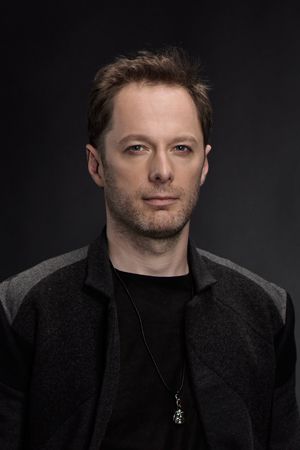 Born in Leningrad (today St Petersburg). Studied the piano and clarinet. He subsequently decided to change direction and went on to graduate from the Baltic State Technical University. In 1998 he released his first album with the group Aurora, recorded on the Melodiya label.
Alexander Maev is currently the General Producer of the Soulsberry Studio recording production company in St Petersburg. Colleagues in the field say that Maev stands apart as a musician with a western mentality – combining and developing various artistic trends, he is involved in sound production in addition to composing music for theatre productions and films. Intensio and Jan are his first one-act ballets, written in close co-operation with choreographer Yuri Smekalov. Intensio was premiered at the Mariinsky Theatre in 2013, while the production of Jan was presented as part of a project of Vladimir Vasiliev’s creative workshop Andrei Platonov and Ballet (Voronezh Opera and Ballet Theatre, 2013).
In August 2013 the Elisa Carrillo Cabrera Theatre and Concert Hall in Texcoco (Mexico) hosted the premiere of the two-act ballet Infinita Frida to music by Alexander Maev (choreography by Yuri Smekalov). In 2013 and 2014 the music Forest from the symphony suite Intensio was performed during the finale of the Kremlin Gala concert in Moscow. In March 2014 the Mariinsky Theatre hosted the premiere of the one-act ballet Camera obscura featuring music by Alexander Maev.