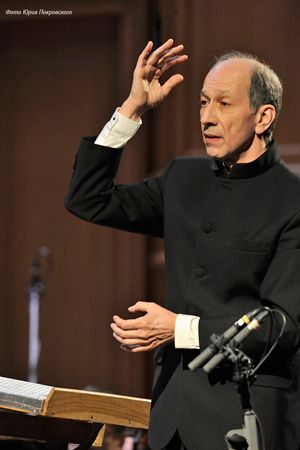 Andrei Golovin was born in Moscow. He received his musical education at the Moscow State Tchaikovsky Conservatoire, from which he graduated in 1976. At the conservatoire he studied under Yevgeny Golubev (composition) and Yuri Fortunatov (instrumentation).
He has written four symphonies, the cantata Simple Songs to verse by Nikolai Rubtsov, Eight Poems by Count Vasily Komarovsky for soprano and orchestra, Canto d’attesa for violin and orchestra, Canzone for Cello and Strings, Two Songs without Words for chamber orchestra, Music for Strings and the musical tableaux Bambi for an ensemble of soloists.
In 1997 the Novaya Opera theatre staged Golovin’s opera First Love based on the tale by Turgenev. The premiere was conducted by the composer himself. For that work the composer received the City of Moscow Literature and Arts Prize. Subsequently the conductor Yevgeny Kolobov (director of the theatre) prefaced the opera with a music and literature composition featuring verse by Bunin and music by Sibelius, naming the lyrical dialogue A Garden of Interest. Melodies.
Golovin frequently works in drama theatre and produces film music; he has composed music for fifteen films, TV series and theatre productions. His music for Sergei Solovyov’s film About Love based on motifs from works by Chekhov received the Mikael Tariverdiev Prize at the Centaur Russian Film Festival in 2004.
Golovin’s works have been performed by the State Academic Symphony Orchestra of Russia, the Tchaikovsky Symphony Orchestra, the State Academic Symphony Cappella of Russia, the Philharmonic Orchestra of Brno, the Symphony Orchestra of the Conservatoire de Rouen, the Symphony Orchestra of the Conservatoire à Rayonnement Régional de Paris, the Musica Viva chamber ensemble and other orchestras under such conductors as Veronika Dudarova, Vladimir Verbitsky, Vladimir Fedoseyev, Valery Polyansky, Igor Zhukov, Alexander Rudin, Olivier Holt, Mischa Damev and Xavier Doulette. The composer’s music has also been performed by, Yuri Bashmet, Maxim Fedotov, Alexander Golyshev, Luana Pellegrineschi and Mlada Khudoley. Since 1994 Andrei Golovin has appeared as a conductor, performing his own works. Last year under his baton the Tchaikovsky Symphony Orchestra prepared the premiere of his Fourth Symphony Light Unapproachable.
The composer’s works have been published by Muzyka, Sovietsky Kompozitor, Alphonse Leduc, Editio Supraphon, Zen-On Music and Musikproduktion Höflich. Recordings have been released on the labels Melodiya, Boheme Music, Arts and Electronics, Cadenza and Relief.
Andrei Golovin is a professor of the faculty of composition and instrumentation at the Gnessin State Music College. In 1998 and 2001 he was a jury member at  the Masterprize international composition competition.