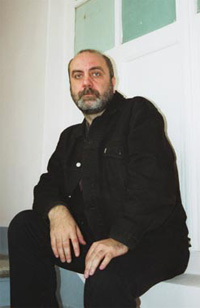 Graduated from the Moscow State Lunacharsky Institute of Theatre Art (GITIS) - now the Russian Academy of Theatre Art (RATI) - having studied in the faculty of circus directing and Mark Mestechkin workshop (1976 - 1981). From November 1987 to May 1989, was Artistic Director of the Domino Theatre Studio in the Creative Workshops of the RSFSR Union of Theatre Workers. During that period, he staged productions including August Strindberg´s Fröken Julie, Paul Claudel´s Partage de midi and Roberto Athayde´s Apareceu a Margarida.

Emigrated to Canada in May 1989. In December 1990 in Toronto, he founded the Horizontal Eight theatre company, of which he was also Artistic Director. In Toronto, he staged many productions including Anton Chekhov´s vaudeville plays The Proposal and The Bear, Albert Camus´ Caligula and Oscar Wilde´s Salome. Mirzoev designed the sets and costumes for these productions together with D. Belopolsky.

Vladimir Mirzoev´s works include the films Russian People´s Post (a 90-minute film for television based on the play of the same name by Oleg Bogaev to mark the 75th birthday of M. Ulyanov, People´s Artist of the USSR. Produced by TVTs, Moscow, 2002) and Passionate and Considerate Contemplation (a 90-minute film for television after the play by Maxim Kurochkin. Made for the Kultura channel, Moscow, 2002).