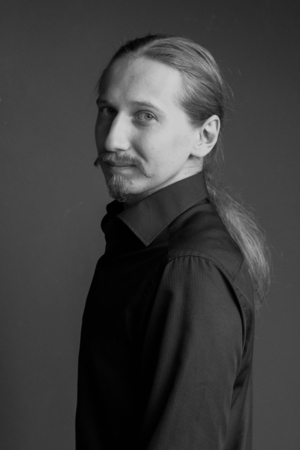 Rustam Sagdiev was born in 1990 in Novosibirsk. In 2010 he graduated with distinction from the Novosibirsk Music College named after Askold Murov (Vocals and Choral Conducting faculties), in 2015 – also with distinction – he graduated from two faculties of the Rimsky-Korsakov St Petersburg State Conservatory (specialising in “classical vocals” and “choral conducting”), and in 2017 he completed an assistant traineeship at the conservatory (Faculty of Composition and Conducting).

Over the years he has been a chorus master of the choruses of Novosibirsk State Pedagogical University and St Petersburg State University and has appeared in concerts with ensembles of the St Petersburg and Moscow conservatories. As a guest chorus master and conductor he has collaborated with the National State Opera and Ballet Theatre of the Republic of North Ossetia–Alania (Tamara and David Soslan and Fedora), the Ryazan Yevgeny Popov State Academic Russian Folk Chorus (the stage cantata The Parable) and St Petersburg’s Comic Opera Theatre Dell’Arte (The Taming of the Shrew).

As a chorus master at the Mariinsky Theatre he has rehearsed premieres of the opera Soldier’s Tales by Alexei Pozin and the cantata God Saves All by Felix Kruglikov; he has worked on the operas Christmas Eve, Cristoforo Colombo, Lakmé, Not Love Alone, Die Zauberflöte, Die Fledermaus, La fanciulla del West, L’elisir d’amore, Rusalka by Dvořák, Don Quichotte, The Love for Three Oranges, Mozart and Salieri, Kashchey the Immortal, Il viaggio a Reims, Lolita, The Enchantress, Il trovatore, The Story of Kai and Gerda and Murych the Cat.

He has composed piano, chamber-vocal, symphony and choral opuses, music for productions of The Little Stomach, The Knitted Country, Henry and Julie and operas (staged at various theatres in St Petersburg and beyond), among them The Turnip (2016, Mariinsky Theatre, directed by Alla Chepinoga; in 2017 the production was presented with a special award from the Onegin National Opera Award) and The Adventures of Kintaro based on motifs from Japanese folklore (2018, Mariinsky Theatre, directed by Dmitry Otyakovsky). Other major works by Rustam Sagdiev include the opera The Palace Guards (2018, Hermitage Theatre), the symphonic tale The Snow Queen (2019, Hermitage Theatre), the stage cantata The Parable (2019, Ryazan Regional Philharmonic), the opera Hearing Voices (2019, Workshop of Anikushin; piano performed by the composer) and Medea – a dramma per musica in three acts and eight interrogations, online mini-series based on motifs of the tragedy by Euripides (libretto by Vsevolod Nelyubov; 2021, media platform of Voronezh’s Youth Music and Plastique Theatre, directed by Dmitry Otyakovsky).

Soloist with the Mariinsky Academy of Young Opera Singers since 2011.

Repertoire at the Mariinsky Theatre:
Bastien (Bastien und Bastienne)
The Police Chief’s Gatekeeper, a Gentleman, a Policeman (The Nose)
А Ridicule (The Love for Three Oranges)
А Foreigner (Orango)
А Fussy Man, a Cossack (Quiet Flows the Don, concert performance)
А Herald, a Cook (Adalmina’s Pearl)
Kintaro (The Adventures of Kintaro)
Solovushko (The Turnip)
Johnny Crome (The Little Sweep by Britten)
Nikolenka (Scenes from the Life of Nikolenka Irteniev by Sergei Banevich)
Mac (The Boy Giant by Tikhon Khrennikov)
The Hare (The Brave Hare by Sergei Banevich)
An Angel (The Christmas Tree by Vladimir Rebikov)
A Boy (Wash ’em Clean by Yuri Levitin)
Vasily (Murych the Cat by Sergei Banevich)
The Runaway Bunny (The Wooden House by Leonid Klinichev)
A Village Lad (The Treasures of the Magic Well by Svetlana Nesterova)

Repertoire also includes: Triuquet (Eugene Onegin), Alfredo Germont (La traviata), Chekalinsky (The Queen of Spades), Mozart (Mozart and Salieri), Charsky (Egyptian Nights by Grayr Khanedanian), Yelisei (The Tale of the Dead Tsarevna and the Seven Bogatyrs by Viktor Pleshak), the Kitten (his own opera The Palace Guards), Vanya (Such Is Life by Alexander Radvilovich), Baron Rouvel, Ivan (Fedora by Umberto Giordano), a Messenger (Tamara and David Soslan by Grayr Khanedanian), the tenor part in Mozart’s Krönungsmesse and chamber vocal opuses and cycles.