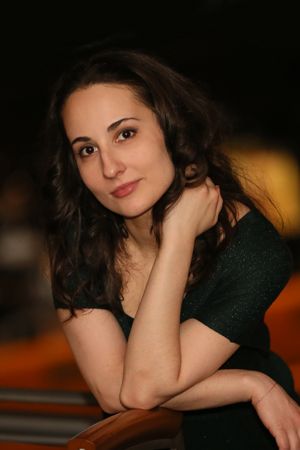 From 1999-2008 she studied at the Royal Swedish Ballet School in Stockholm.
From 2008-2012 she was a dancer with the National Academic Bolshoi Opera and Ballet Theatre of the Republic of Belarus, appearing in performances of Swan Lake, Giselle, The Nutcracker, The Sleeping Beauty, Don Quixote, La Bayadère, Romeo and Juliet, Carmina Burana, La Sylphide and Chopiniana.

In 2011 she created a dance-video project with the Cullberg Ballet. In 2012 and 2013 she was a choreographer at the festival O/Modernt in Stockholm.
From 2013-2014 she taught modern dance at the performing faculty of the Vaganova Ballet Academy.
She has created a great number of productions for senior-year students at the Vaganova Ballet Academy.
The miniature Soaring, created for the international festival of ballet schools Three Centuries of World Ballet (Moscow, State Kremlin Palace), received the Mikhailovsky Theatre Grand Prix in 2013. In April 2014 she made her debut at the Mariinsky Theatre during the Young Choreographers’ Creative Workshop project, in addition to making appearances in Dresden and at the Russian Arts Festival in Cannes.
In 2015 Xenia Zvereva trained at the Nederlands Dans Theater (NDT), staged a production for the Royal Swedish Opera Foundation and rehearsed concert pieces for the ballet company of the Astana Opera.
As part of the Creative Workshop of Young Choreographers project at the Mariinsky Theatre, in March 2015 she presented Remember the Future to music by Johann Sebastian Bach and Second I to music by Philip Glass. The ballet Second I entered the repertoire of the Mariinsky Theatre and in December 2015 it was performed during the company's tour to Baden-Baden (Germany).

In April 2016 as part of the Creative Workshop of Young Choreographers she presented a production of Labyrinth to music by Franz Schubert and Andrei Martynov and Elegy. Ophelia to music by Pyotr Tchaikovsky, which was named among the best premieres of the season 2015/2016 by Dance Europe Magazine. Also in 2016 she staged a production for the Carina Ari Foundation (Sweden) of the project Days of Yemen and Syria at the Hermitage.

In 2016 she graduated from the pedagogical faculty of the Vaganova Ballet Academy (The Art of the Choreographer training programme, Master’s Degree). In 2016 she gave workshops in contemporary dance in the Belarusian State Choreography Gymnasium-College (Minsk,Belarus) and the Academy of Choreography in Astana. In 2017 she created new works for the Astana Opera and for contemporary choreography workshop in the Royal Swedish Opera.