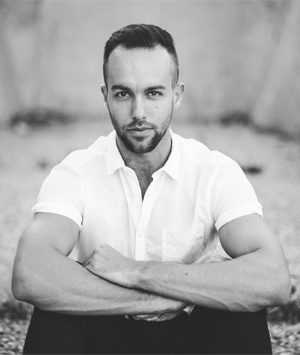 Garrett Smith was born in Salt Lake City (Utah, USA). He began his dance training with the Utah Regional Ballet and had the honour to perform in the 2002 Salt Lake Winter Olympics Opening Ceremony. In 2003 and in 2005 Garrett won a national title with his own choreography for the NYCDA dance convention. Garrett was named a Presidential Scholar in the Arts and received this prestigious award from Mikhail Baryshnikov. Later he studied at the Houston Ballet Academy and created five works for the Houston Ballet II's repertoire that were taken on tours throughout the United States, Canada, China and Hungary. As a dancer with the Houston Ballet, Garrett Smith danced works by Stanton Welch, Jorma Elo, Nicolo Fonte, Christopher Bruce, Ben Stevenson, and Christopher Wheeldon. Garrett received the right to choreograph his first work for the main company of the Houston Ballet thanks to an award presented to him by the New York Choreographic Institute Fellowship (affiliated with New York City Ballet). Subsequently, in the 2013 and 2015 seasons, he was again commissioned by the Houston Ballet to create new works. Since 2012 the dancer has been a member of the Norwegian National Ballet, where he had the pleasure to work personally with the choreographers Jiří Kylián, Nacho Duato and Alexander Ekman, in addition to dancing other works by William Forsythe. In the USA, Garrett has been commissioned by Ballet West, Texas Ballet Theater, Salt Contemporary Dance, Odyssey Dance Theater, Milwaukee Ballet and Cincinnati Ballet. In 2014, Garrett was a selected choreographer to produce a new work for the annual project National Choreographers Initiative. New York City Ballet selected him to create a production for the company as part the 2015 New York Choreographic Institute Fellowship. In 2015 at the Milwaukee Ballet's Genesis International Choreographic Competition, his creation Mortal Form took 1st place. His production at the Mariinsky Theatre has been made possible thanks to his victory at the Youth America Grand Prix competition in 2016 in the category "Outstanding Choreographer".