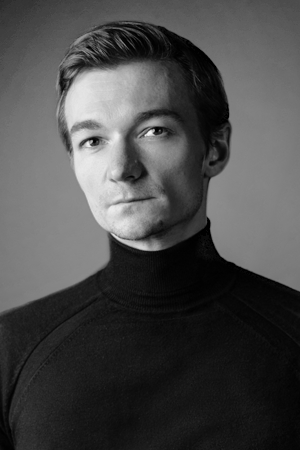 It is surprisingly organic when every cell of the body dances and every step is filled with feeling, there is a sense of meaning to every second of the dance and every movement is outstretched to the last musical moment – such a performance is a great rarity today.
St Petersburg Theatre Journal

Alexander Sergeev used the breadth and amplitude inherent in his performing style to maximum effect. Scrupulously following the letter and spirit of Yakobson’s choreography, he opened up the possibilities of the plastique text of the role as much as possible. He created an excellent Shurale in terms of the character’s multifaceted image. In Act I the imposing and egocentric lord of the woods led the life of a sybarite. In Act II the nimble and cunning wretch darted about. And in Act III the spurned and dejected lover Leshy rampaged.
Ballet ad libitum

The young European David Dawson’s Reverence... A rising star of the Mariinsky, Alexander Sergeev performed it brilliantly... Sergeev combined in one the almost “swan-like” and slow arms, dagger-like arabesques and the legs resembling the cracks of a whip – these are the nuances of an elegy of the body angles created by Dawson to the music of this heartfelt violin solo.
Nezavisimaya Gazeta

Born in Leningrad.
Graduated from the Vaganova Ballet Academy in 2004 (class of Professor Gennady Selyutsky).
Joined the Mariinsky Ballet in 2004.
Soloist since 2010.

He danced in the premiere performances of Diana Vishneva: Beauty in Motion (Three Point Turn by Dwight Roden, Pierrot Lunaire) in the USA and in the Russian premiere at the Mariinsky Theatre.

In April 2021 he made his debut as a reader in the performance of Stravinsky's The Story of a Soldier at the Concert Hall of the Mariinsky Theater.