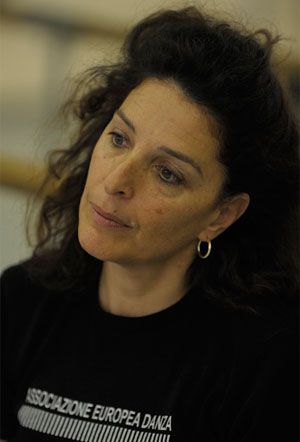 Born in Israel. Choreologist, rehearsal director and modern dance teacher. Has worked with Angelin Preljocaj for over twenty years as an assistant in creating and restaging his ballets all over the world. Works with the Opéra de Paris, New York City Ballet, the Teatro alla Scala, the Royal Danish Ballet, the Royal Swedish Ballet, the Berlin Opera, the Nederlands Dans Theater and the Mariinsky Theatre.
From 1994–1998 she was Co-Artistic Director of the Batsheva Ensemble with Ohad Naharin. From 1999–2006 she was Artistic Director of the Shades in Dance Festival, the National Competition for young Israeli choreographers at the Suzanne Dellal Centre, Isarael.. Noémie Perlov has been the rehearsal director for many Israeli choreographers and companies, among them Itzik Galili, Emanuel Gat, Barak Marshall, Shlomi Bitton, Michael Getman, The Mayumana Group and The Aluminum Show. She has taught at the Rotterdam Dance Academy, the Ballet School of La Scala, the Conservatoire de Paris, the Alvin Ailey Dance School, the Jacob’s Pillow summer course, the Rubin Dance Academy in Jerusalem and Israel’s Suzanne Dellal Centre for Dance. In 2009 she founded and directs a school for professional dance training at the Bikurei Haitim Art Center in Tel-Aviv.