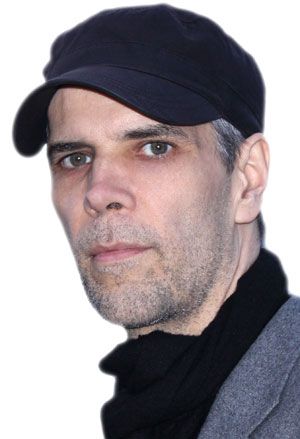 Born in London. Is involved in various transversal activities as a musician and visual artist. Following his encounters with David Byrne, the Ruts, Adrian Sherwood and Vivian Goldman, he published interviews in Yugoslavian magazines. A guitarist in various rock bands, he founded the group Oko 3 in France. Edited a book on Brian Eno in 1984. His activities include work in fields as diverse as psycho-acoustics, silence, self-generating systems, the origin and disappearance of sounds, their invisible traces, non-emotional listening, the process and the final product. Intrigued by the deep sense of sound and its modes of representation, he also explores areas such as contemporary art, science, radio, the internet, film and future cultural hybrids. He has composed music for film, television and fashion. He has worked with Enki Bilal on the soundtracks for his films Tykho Moon and Immortal. Together with Angelin Preljocaj he has composed music for the latter’s ballets at the Opйra de Paris. With his “open source” unit called Background, he has exhibited and performed throughout the world using new technology, dance and contemporary techniques in pieces such as Tuning: Analoghumanradios, Crowd Chord and Sayat Nova. He recently produced A Square Of Silence, a book covering three decades of his sound art which was published by Emanuele Carcano in Milan.