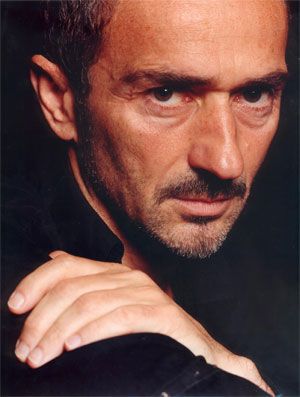 Angelin Preljocaj was born in Paris. Having started out as a classical dancer, he began to study contemporary dance under Karin Waehner. In 1980 he went to New York to work with Zena Rommett and Merce Cunningham. He then resumed his studies in France, where his teachers included the American choreographer Viola Farber and the French choreographer Quentin Rouillier.
He then joined Dominique Bagouet’s company before founding his own company in December 1984.

Angelin Preljocaj works regularly with other musicians and artists including Enki Bilal (Romeo and Juliet, 1990), Goran Vejvoda (Paysage après la bataille, 1997), Air (Near Life Experience, 2003), Granular Synthesis (“N” , 2004), Fabrice Hyber (Les 4 saisons, 2005), Karlheinz Stockhausen (Eldorado – Sonntags Abschied, 2007), Claude Lévêque (Siddharta, 2010) and Subodh Gupta (And Then, One Thousand Years of Peace, 2010).
His productions have become part of the repertoire of many companies throughout the world including the Teatro alla Scala, New York City Ballet and the Paris Opéra Ballet.
As a director he has made films including Le postier and Idées noires (1991), U  trait d’union (1992) and Annonciation (2003) for which he was awarded the Grand Prix du Film d’Art in 2003, the Vidéo-Danse 1st prize in 1992 and the Prague Video Festival Prize in 1993.
He has also collaborated on several films presenting his own choreographic works including Les Raboteurs after the painting by Gustave Caillebotte (1988), Pavillon Noir (2006), Eldorado (2007) and Snow White (2009).

Several books have been written about his work, among them Angelin Preljocaj (2003), Pavillon Noir (2006) and Angelin Preljocaj, Topologie de l’invisible (2008).
In the course of his career he has received numerous awards including the Grand Prix National de la Danse, presented by the French Ministry of Culture (1992), the  Benois de la Danse for the ballet Le Parc (1995), the Bessie Award for the ballet Annonciation (1997), Les Victoires de la Musique for the ballet Romeo and Juliet  (1997) and the Globe de Cristal for the ballet Snow White (2009). He is an Officier des Arts et des Lettres, a recipient of the Order of the Légion d’Honneur and an Officier de l’Ordre du Mérite (2006).
Since October 2006 the Ballet Preljocaj, including twenty-six permanent dancers, has been based at the  Pavillon Noir Centre Chorégraphique National in Aix-en-Provence.