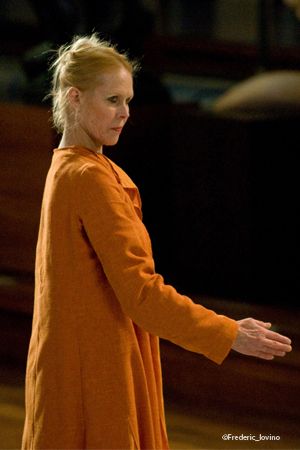 Carolyn Carlson’s artistic career began in the USA. Native to California, she studied at the University of Utah and, from 1965–1971, danced with Alwin Nikolais’ company. His ideas about movement, composition and teaching became the most important resource in Carlson’s creative “baggage” when she arrived in France in 1971. One year later with the ballet Rituel pour un rêve mort, performed at the Avignon Festival, Carolyn Carlson declared her own poetic manifesto and defined her own approach to the working process: dance that is strongly oriented towards philosophy and spirituality. Carlson prefers the term “visual poetry” to “choreography” when describing her work.

In 1974 she was appointed Étoile-Chorégraphe of the Opéra de Paris (a position created especially for her), from 1980-1984 she directed the Teatrodanza Contemporaneo La Fenice, from 1985-1991 she had a residency at the Théâtre de la Ville in Paris, from 1991-1992 she had a residency with the Finnish National Ballet and the Helsinki City Theatre Dance Company, from 1994-1995 she was Artistic Director of the Cullberg Ballet, from 1999-2002 she directed the dance section at the Venice Biennale and from 2004-2013 she directed the National Choreographic Centre Roubaix Nord-Pas de Calais. In 1999 in Paris Carolyn Carlson founded the dance studio L’Atelier de Paris, while in 2014 she established the Carolyn Carlson Company, which is in residence at the Théâtre National de Chaillot in Paris.

Over four decades Carlson has exerted a significant influence on the development of the art of choreography in Europe. She has played a key role in the emergence of French and Italian modern dance thanks to the establishment of the Groupe de recherches théâtrales at the Opéra de Paris and the Teatrodanza Contemporaneo La Fenice in Venice.

Carolyn Carlson has staged over one hundred productions, many of which have proved landmarks in the history of dance, among them Signes, Density 21.5, Blue Lady, The Year of the Horse, Маа, Writings on Water and Inanna.

In 2006 her work received the Golden Lion at the Venice Biennale, the first time ever it has been presented to a choreographer. Carolyn Carlson is a Commander of the Ordre des Arts et des Letters and an Officer of the Légion d’Honneur (France).