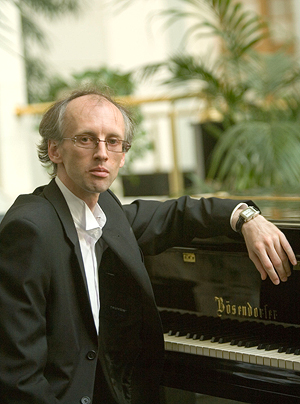 Born in Moscow. After graduating from the Moscow Academic School of Dance in 1986 (class of Professor Pyotr Pestov) he joined the company of the Moscow State Russian Ballet Theatre under Vyacheslav Gordeyev, where he performed lead roles in ballets in the classical repertoire. From 1993 –1996 he trained at the choreography faculty of the RATI-GITIS (course of Vyacheslav Gordeyev), subsequently transferring to the Bolshoi Ballet Academy, from which he graduated with distinction in 1999, specialising as a "teaching choreographer". In 2006 he worked as a choreographer of the Russian Ballet theatre, and from 2007 – 2008 he was its Artistic Director. In 2008 he was choreographer of the Bolshoi Theatre, and from 2009 – 2011 he was Artistic Director of its Ballet Company.

As a choreographer he has worked on productions of classical ballets and evenings of early choreography at the Bolshoi Theatre, the Yekaterinburg, Chelyabinsk and Perm Opera and Ballet Theatres, the Staatsballett Berlin, the Ballet Nacional de Mexico, the Bolshoi Ballet Academy and the Vaganova Ballet Academy. Has produced academic and methodological aids on the classical legacy of ballet theatre, publications of ballet scores, including the piano score of surviving musical extracts of the ballet Paquita and recordings of the choreographic text by Marius Petipa (together with German Pribylov).