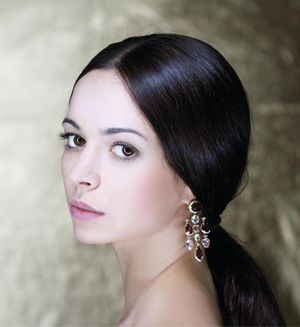 From Vishneva’s formidable technique to her musicality, her exquisite purity of style and her sheer artistry, she cannot be beaten.

…Ask me to break down what exactly Vishneva does to bring that about, dancing the same steps thousands of ballerinas have danced before her, and I'm at a loss. Better to ask by what measure of glue, wood and design a Stradivarius gets its tone.

Diana Vishneva was born in Leningrad. She graduated from the Vaganova Ballet Academy (class of Professor Lyudmila Kovaleva). During her last year at the Academy she also trained at the Mariinsky Theatre. Diana Vishneva joined the Mariinsky Ballet Company in 1995, and has been a Mariinsky Theatre soloist since 1996.
Diana Vishneva frequently performs at the Europe's most prestigious venues. In 2001 she made her debut at the Bayerisches Staatsballett (Kenneth MacMillan's Manon) and at the Teatro alla Scala (Aurora in Rudolf Nureyev's version of The Sleeping Beauty), while in 2002 she appeared at the Opéra de Paris (Kitri in Rudolf Nureyev's version of Don Quixote). In 2003 came her debut at the Metropolitan Opera in New York (Juliet in Kenneth Macmillan's version of Romeo and Juliet).