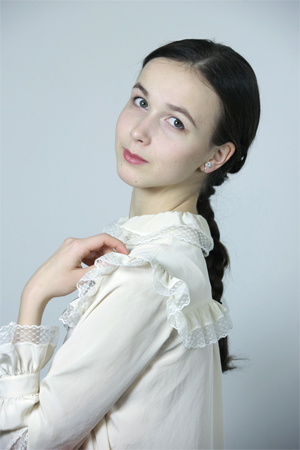 Ilyushkina’s Odette is surprisingly un-contemporary in the finest sense of the phrase – it cannot be said that the image has been created “vintage-style”, yet at the same time the careful port de bras, the movement of the arms, the poses revealed and the foreshortening of the duet supports appears like a delicate reminiscence, a hint at images of the past on which the ballerina as if casts her gaze. Apropos, even without this elegant stylisation Maria herself seems to belong rather to “that” era than “this”. The “white” acts are chaste and sublime. Here the unmistakable spiritual lyricism is important, the playfulness of the swanlike lines of the body, the focus on classical purity of dance. The beautiful refrain of the White Adagio resounded with a soaring arabesque in which the dancer froze for several seconds.
Yekaterina Pollak. Beatrice Magazine. 15.01.2020

Her dance is something sacral. And so it is beyond any categories of purity and academism, it is beyond the criteria of technique. The more so, as Maria technically copes with everything: she neither simplifies nor lets slip a single movement. In the “Dance with the Serpent” [in La Bayadère] even professionals are amazed at her technical refinement: her free développé en arabesque and her sous-sus with her distinct leg en pointe. In the third act, she crowns the mysterious action of the coda with her pas glissé to the top of the very stage – a feat capable far from everyone – and she also adorns it with counterpoint from her flowing port de bras. In the act of the “Shades” the inner whiteness and purity of performance take on an external form. Just like love, from the very first bearing features of the ethereal, it takes on a higher form.
Arseny Surzha. Blog of Teatr magazine. 31.12.2021

… In the pointe prologue [of The Sleeping Beauty] Maria Ilyushkina softened the impeccability of her dance with a tender sophistication; in the other acts, exhibiting high heels and late 19th century fashions, miming sincerely and expressively.
Tatiana Kuznetsova. Kommersant. 18.02.2022

Born in St Petersburg.
Graduated from the Vaganova Academy of Russian Ballet in 2016 (class of Yulia Kasenkova).
Joined the Mariinsky Ballet in 2016. Soloist from 2020.