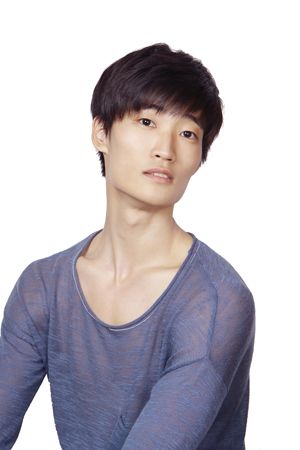 ... Kimin Kim is a dancer it is hard to describe without drowning in superlative adjectives. But it could be no other way, as he is one of those selected few who are born to live and breathe through dance. “He is ready for some feat, executed with zeal, with a gaze in which there lies the fire of discovery”; these lines from Mahabarata are said as if about Kimin Kim performing kshatriya. His Solor is inexpressibly poetic, refined in its flight, like some arrow released from a bow. His appearance in the Kingdom of Shades (or rather it would be better to say his soaring in four impetuous leaps into the Kingdom), just a few moments before Nikia’s shade descends from the Himalayas, is anticipated each and every time as a miracle, as a mystery that one can touch for just a few seconds before it dissipates in the gloom.

Kimin Kim is certainly one of the great dancers of today. Technically he is superb, with a spectacularly high jump, smooth, musical turns that go purring round like a Rolls-Royce engine, and a steely core that enables him to be in complete control over the most demanding of adagio movements. His elegant physique adds to the sense of nobility his bearing and head carriage convey and enhances his lovely arabesque line. What lifts him onto an even higher plane is his musicality; he melds the movement with the dynamics of the music so that they become one, as Petipa and Ivanov intended, and it is a pleasure to watch.

Mariinsky Theatre Principal Dancer Kimin Kim did not perform the role of the God of the Wind, though, it seemed, it really was he - he flew over the huge stage of the Bolshoi Theatre, as though absolutely defying the laws of gravity, and produced inspired whirls of pirouettes.

In 2012 together with The Youth Ballet of Asia he appeared in Krasnoyarsk at the Asian-Pacific Nations’ International Music Festival.