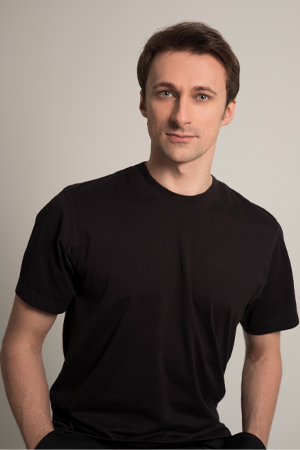 But the dancer appeared, he barely slanted his shoulders and we were face to face with the puppet first brought to life by Nijinsky and subsequently by many great dancers. There was indecision in every move. And there is also persistence, the haughtiness of a poet. And a wild lack of belief in himself. In this Pétrouchka’s veins it was reflection and not blood that flowed; and he banged on the invisible walls in such a way that it was as if we were looking at a fortress.

Mariinsky Theatre dancer Filipp Stepin (Basilio) is super-graceful, refined and powerful, and his dance is energetically infectious and full of fire, yet at the same time not uncontrolled – in him one can sense beauty of style and understanding of that style...

Valeria Martynyuk and Filipp Stepin danced the Act I peasant pas de deux with style and accuracy. He is tall and well mannered, with impressive double tours and nicely pointed feet.

Born in Leningrad into a ballet family.
Graduated with honors from the Vaganova Ballet Academy in 2005 (class of Boris Bregvadze).
During his studies, he was awarded the President's Scholarship.
Joined the Mariinsky Ballet in 2005; soloist since 2009.