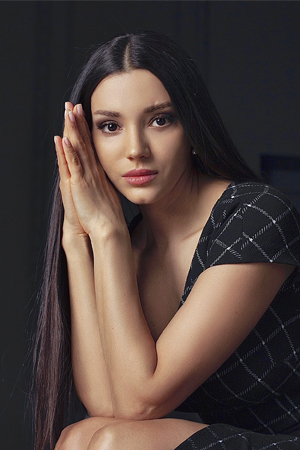 Soprano Yulia Suleimanova was born in Kherson and studied with Nina Arsentieva at the St Petersburg State Conservatory before enrolling at the Mariinsky’s Academy of Young Opera Singers in 2014. At the Conservatoire Theatre she performed the roles of Euridice (Gluck’s Orfeo ed Euridice) and Marfa (Rimsky-Korsakov’s The Tsar’s Bride).

In summer 2018 she made her Salzburg Festival debut as Prilepa in production of The Queen of Spades.

Repertoire at the Mariinsky Theatre:
Mademoiselle Silberklang (Der Schauspieldirektor)
Pamina (Die Zauberflöte)
Tsaritsa of Shemakha (The Golden Cockerel)
A girl with a high-pitched voice (Not love alone)
Giulietta (I Capuleti e i Montecchi in concert)
A Page (Rigoletto
Ellen (Lakmé)
Friends of the Infanta (The Dwarf in concert)

Yulia Suleimanova regularly appears in chamber music concerts by the Academy of Young Opera Singers and in productions for children: Adalmina’s Pearl, The Boy Giant, The Little Prince. She performed Ustenka role on the premiere of Klinichev’s opera The Cossacks.