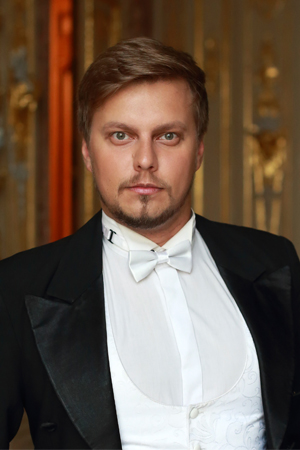 From 2006–2011 he was a soloist with the St Petersburg Musical Comedy Theatre.

From 2011 he was a soloist with the Mariinsky Academy of Young Opera Singers. He made his debut there in the musical My Fair Lady.

In March 2018 he made his debut at the Bolshoi Theatre of Russia in Weinberg’s opera The Idiot.

Has appeared on tour with the Mariinsky Theatre in Baden-Baden (Chekalinsky in The Queen of Spades and Hylas in Les Troyens), Japan and China (Kuragin in War and Peace, Triquet in Eugene Onegin and Chekalinsky).

Has featured in a performance of Shostakovich’s unfinished opera Orango conducted by Esa-Pekka Salonen at festivals in Helsinki and Stockholm (2014) and London (2015, BBC Proms). Under Salonen he performed the tenor role in Les Noces and the second tenor role in Le Renard at a festival of Stravinsky’s music in London (2016).