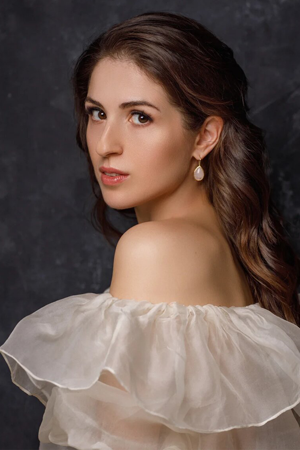 In 2008 she made her debut at the Novosibirsk State Academic Opera and Ballet Theatre in the title role of Georges Bizet’s opera Carmen. At the Novosibirsk Opera she has also performed the roles of Polina and Milovzor in The Queen of Spadesand Siébel in Faust.

Since 2010 she has been a soloist with the Mariinsky Academy of Young Singers.

In 2011 Irina made her debut at the Latvian National Opera as Olga (Eugene Onegin) and at the Crescendo festival (Artistic Director – Denis Matsuev). The same year, she appeared at the Kennedy Center (Washington) with the Ural Philharmonic Orchestra under Dmitry Liss.
In 2013 she appeared in a series of concerts as part of a tour of Europe by the Mariinsky Academy of Young Opera Singers to such venues as the Grand Opéra of Geneva, Wigmore Hall (London), the Opéra National de Bordeaux, the Serate musicali (Milan), Auditorium St-Pierre-des-Cuisines (Toulouse), Prinz-Regenten-Theater (Munich) and the Brucknerhaus (Linz).

Her repertoire also includes: Lyubasha (The Tsar’s Bride), Joan (The Maid of Orleans), Carmen (Carmen) and Dido (Dido and Aeneas).

Has toured to South Korea and the USA. Frequently takes part in music festivals in Russia and abroad.