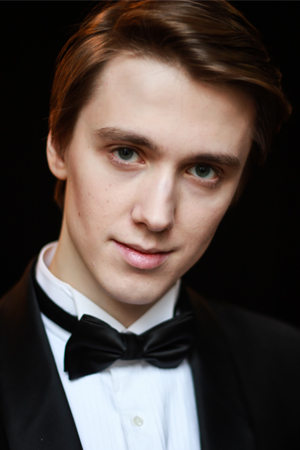 In 2012 he joined the Mariinsky Academy of Young Opera Singers.

In 2019 he took part in the Alberto Zedda Russian Academy at the composer's festival in Pesaro, where he continued his studies under Ernesto Palacio. As part of a summer school he took part in master-classes conducted by Juan Diego Flórez and appeared in the festival's production of the opera Il viaggio a Reims (the role of Baron Trombonok).

Has trained at the Teatro Comunale in Modena (Italy), where he attended master-classes with Mariella Devia, Nicola Martinucci, Leone Magiera and Michele Pertusi.

Takes part in children's performances at the Prokofiev Hall, among them The Giant, An Opera about Porridge, a Cat and Milk, Scenes from the Life of Nikolenka Irtenev, The Boy Giant, The Treasures of the Magic Well, The Little Prince and Adalmina's Pearl.

Regular participant in chamber vocal evenings of the Academy of Young Opera Singers. As part of the concert subscription dedicated to St Petersburg composers he has performed the cycles Songs of Béranger by Yuri Falik, Soul and Body by Boris Arapov and Biblical Motifs by Grigory Korchmar.