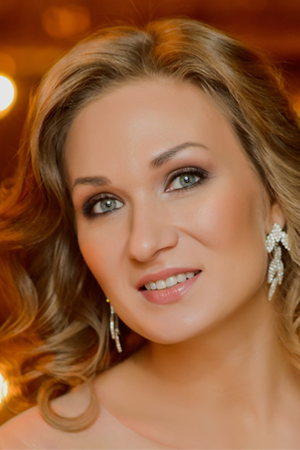 Gelena Gaskarova was born in Leningrad. In 2008 she graduated from the St Petersburg State Rimsky-Korsakov Conservatoire (class of Grayr Khanedanian). In 2001 she was accepted into the Mariinsky Academy of Young Opera Singers.

At the Mariinsky Theatre, Gelena appeared in premiere performances of such operas as Iolanta (2009) and Eugene Onegin (2014) under the baton of Valery Gergiev. She also helped premiere the musical My Fair Lady (2012, staged by Robert Carsen). In 2017, she sang the part of Zinaida Gippius in Leonid Klinichev’s Zinaida and the title role in Gaetano Donizetti’s Lucrezia Borgia (conducted by Renato Balsadonna). Gaskarova also performed at the concert conducted by Valery Gergiev at the festival in Rotterdam (2009), in the production of Eugene Onegin at the festival in Savonlinna (2013), and the Northern Lights Music Festival in Minnesota (2017).

She has appeared as Iolanta and Tatyana in Pyotr Tchaikovsky’s operas productions performed under the baton of Tugan Sokhiev at the Halle aux Grains de Toulouse and the Salle Pleyel in Paris. Gelena has also performed as Tatyana at the Latvian National Opera, theatres in Nantes, Angers, and Tours, as well as the Mikhailovsky Theatre. The singer has appeared as Iolanta in the productions of the Opéra-Théâtre de Metz Métropole and the Opéra national de Lorraine in Nancy. In 2015, Gelena took part in the productions of Sergei Rachmaninoff’s Francesca da Rimini and Aleko at the Opéra national de Lorraine, where she sang the roles of Francesca and Zemfira.

As a guest soloist, Gelena has performed in the productions of such operas as Eugene Onegin and Rusalka (conducted by Mikhail Tatarnikov) at the Mikhailovsky Theatre. In 2014, she sang the part of Maria in the opera Mazeppa under the baton of Alexander Vedernikov at the Royal Concertgebouw. Gelena has given concert performances in Paris, Rome, Milan, Bari, Munich, Bonn, as well as in many cities and towns of Russia. The singer has collaborated with such directors as Robert Carsen, Mariusz Treliński, Silviu Purcărete, and David Hermann.