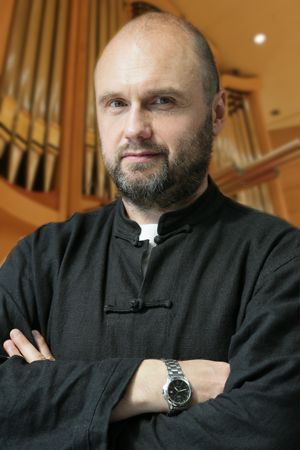 Oleg Kinyaev graduated from the Mikhail Glinka Choral School of the St Petersburg State Academic Capella and the St Petersburg State Rimsky-Korsakov Conservatoire as a pianist (classes of Professor Dmitry Svetozarov and Senior Lecturer Larisa Vaghina) and organist (class of Professor Nina Oksetian). In 1986, following his victory at the All-Union Competition, he was invited to take the post of Principal Organist at the Kharkov Regional Philharmonic, subsequently working as an organist and concert master at the St Petersburg State Academic Capella. As an organist he toured throughout Russia and abroad. As a soloist he appeared with the London Symphony Orchestra, the Nordwestdeutscher Rundfunk Symphony Orchestra (Hamburg) and the Symphony Orchestra of the Warsaw Philharmonic.
On numerous occasions he appeared at international organ festivals in Herford (Germany), Warsaw Autumn (Poland) and the BBC Proms (Great Britain). From 2001-2006 he was Artistic Director of the Kharkov Bachiana international organ festival.

He was actively involved in the installation of the organ at the Concert Hall of the Mariinsky Theatre which was manufactured by French company Daniel Kern, concluding agreements with the manufacturer regarding the instrument’s disposition. From 2008 he was the Concert Hall’s Organ Master and Principal Organist, regularly performing concerts there.

The organist collaborated with such outstanding musicians as Sofia Gubaidulina, Sergei Slonimsky, Rodion Shchedrin, Boris Tishchenko, Valery Gergiev, Mariss Jansons and Vladislav Chernushenko to name but a few. Oleg Kinyaev composed several works for organ in addition to producing arrangements for organ of works by Tchaikovsky, Barber and Hovhaness.

Oleg Kinyaev recorded five CDs. He taught organ at the St Petersburg State University and at the Glinka Choral School. In the 2013–2014 season he founded and was Artistic Director of the I International Organ Festival at the Concert Hall of the Mariinsky Theatre which marked five years since the installation of the organ. He also worked on the festival programme for the 2014-2015 season.