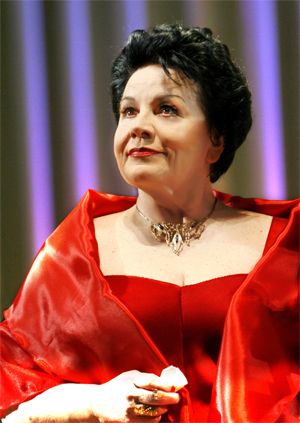 Was born and grew up in Leningrad. Graduated from the Leningrad Conservatory in 1965 (solo vocals class of Iraida Timonova-Levando). As a student at the conservatory she won 2nd prize at the All-Union Glinka Vocalists’ Competition in Moscow (1962), following which she was invited to join the Kirov Theatre. Made her debut there in 1964, performing the role of Polina in the opera The Queen of Spades. Following her victory at the International Rio de Janeiro Vocalists’ Competition (1967) she trained at La Scala, where she studied under the acclaimed teacher and mentor Gennaro Barra-Caracciolo. In 1969 she made her debut in Milan at the Teatro alla Scala in the opera Un ballo in maschera (Ulrica).

At the Mariinsky Theatre, Irina Bogacheva performed some thirty roles, including Carmen in Bizet’s eponymous opera, Amneris in Aida, Lyubasha in The Tsar’s Bride, Marfa in Khovanshchina, Azucena in Il trovatore, Charlotte in Werther and Marina Mniszech in Boris Godunov. The role of the Countess in The Queen of Spades became the singer’s “calling-card” and set the benchmark for several generations of opera singers. She was the first performer of Dmitry Shostakovich’s song cycle Six Poems of Marina Tsvetaeva (1973).

People’s Artist of the USSR (1976), recipient of the State Prize of the USSR (1984), Chevalier of the order For Services to the Fatherland (4th and 3rd classes), the Order of Friendship of the Peoples, recipient of the theatre prizes the Golden Mask (2017, “For an outstanding contribution to the development of theatre art”) and the Golden Sofit (1995, 2012) and an Honorary Citizen of St Petersburg (2000).

From 1980 she taught at the Leningrad Conservatory (becoming a professor in 1982), and was Head of Department for solo singing at the St Petersburg Conservatory. Irina Bogacheva’s students included Mariinsky Theatre soloists Olga Borodina, Olga Savova, Elena Vitman and Natalia Yevstafieva. It was on the singer’s initiative that the conservatory runs the St Petersburg international opera singers’ competition.