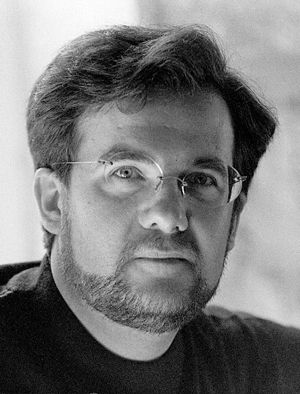 Jean-Pierre Lecaudey was worn in Saint-Briac in 1962 and studied the piano from an early age. In 1977 he entered the Conservatoire in Aix-en-Provence (class of Jean Costa), from which he graduated with the gold medal in 1980 before continuing his studies at the Conservatoire de Toulouse in organ (class of Xavier Darasse) and piano (class of Michel Dru). In 1982 his examiners unanimously awarded him the gold medal, while in 1983 he received first prize for perfecting his technique. In June the same year he won first prize at the II International Competition in Toulouse, performing a programme of symphony music by French composers. Since 1983 Lecaudey has given over seven hundred concerts as a soloist in France and throughout Europe and North America as well as taking part in numerous international festivals.

His recordings invariably draw enthusiastic responses from the critics, who praise Lecaudey as an outstanding performer. In 1996 he was awarded the prestigious Choc prize which was established by France’s Le Monde de la musique for his recording of works by Ermend Bonnal. The magazine has called him “the perfect performer” of this composer’s music. In 1997 he received this prize again, this time for a recording of Bonnal’s music for chamber orchestra and piano. Lecaudey is also the recipient of five Diapason d’Or awards, presented for his recordings of organ works by Lagrasse and Forcalquier and Bach’s Trio Sonatas. Here are some critics’ responses to the disc featuring works by Maurice Duruflé: “Lecaudey’s performance of the fugues creates an intensely powerful impression (Toccata, Op. 5 being the finest example)...” (Michel Roubinet, Diapason magazine). “The new atmosphere leaves a vast expanse for the organist’s skill (what stunning precision in his performance of the Toccata, Op. 5)...” (Laurent Barthel, Répertoire). His most recent CD featuring music by Charles Chien was awarded the Orphée d’Or from the Acadйmie du Disque Lyrique in the category “Best recording of works by a French composer in the past year.”

Over the last fifteen years, Lecaudey, widely known as a performer of symphony music and the contemporary repertoire, has also won great popularity among aficionados of baroque music thanks to his performances of works by Johann Sebastian Bach, Dietrich Buxtehude and various 17th and 18th century French composers, among them Nicolas de Grigny and Louis-Nicolas Clérambault). His research in music of that era and materials of his master-classes formed the basis of a book which examines in detail the problems of performing early French music: the use of registers, ornamentation, applicature and the use of sound production. Explanations are given using examples of all musical texts that have survived to this day from that era, from Nivers to Bédos de Celles.

Every two years the musician presents a series of concerts featuring works by a composer selected by him. In 2000 he performed all of Johann Sebastian Bach’s organ works, in 2002 it was Messiaen (with additional piano music – the renowned Quatuor pour la fin du temps), while on 29 and 30 November 2003 there were concerts dedicated to Nicolas de Grigny. In 2004 there was a “double” dedication to Vierne and Franck, while 2007 saw a performance of five concerts in memory of the great Buxtehude – the most renowned German organist of his age.

As a pianist Lecaudey performs together with chamber ensembles featuring the violin, cello or flute, showing a preference for the genre of the romantic sonata (Brahms, Franck, Fauré and Mendelssohn).

For ten years Lecaudey has also led the orchestra of the Bouches-du-Rhône region, the repertoire of which includes music from various eras: symphonies by Mozart, works by Ravel and Debussy and music by contemporary composers.

Since 1985 he has been the resident organist at the cathedral in Saint Rémy de Provence (a Pascal Quoirin organ) and one of the organisers of the Organa festival, which brings together the greatest organists from across the globe on an annual basis.

Since September 2000, Jean-Pierre Lecaudey has taught organ and composition at the Conservatoire d’Avignon.