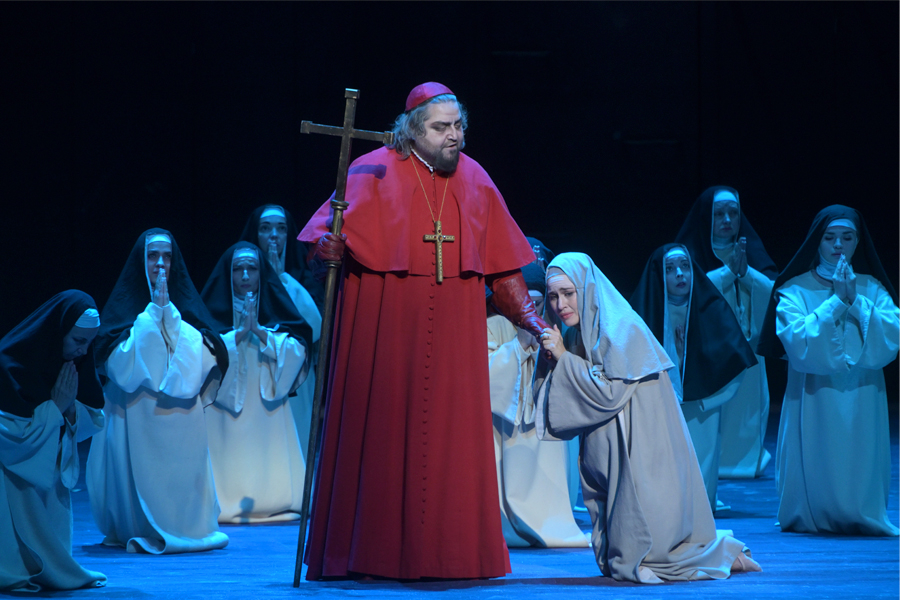 opera in five acts
Performed in Russian (the performance will have synchronised Russian and English supertitles)
Performance has been rescheduled from May 18, 2020

The action takes place in the early 16th century in and around Cologne.

Act I
Ruprecht, a knight returning to Europe from America, stops over at a squalid tavern in a German settlement. From the next room the cries of a woman tormented by visions can be heard. Ruprecht comes to her assistance and she, unexpectedly calling the knight by name, tells him her story. Her name is Renata and in her childhood she began to see a fiery angel called Madiel, whom she came to love with all her heart. On growing up, Renata wished to be united with him in a physical sense, at which Madiel became incensed and disappeared, later appearing to her in the guise of Count Heinrich. The Count took the girl to his castle and they were happy, but one day Heinrich left without warning and never returned. For many days the abandoned Renata has sought her beloved, and at night she is pursued by evil spirits. The mistress of the tavern tells Ruprecht that her strange guest is rumoured to be a witch; she then brings in a fortune-teller who promises Renata a dreadful outcome.

Act II
Ruprecht accompanies Renata on her search for the Count: he is in love with Renata and swears to serve her faithfully; she, however, is immersed in a study of demonological treatises and can think only of how to reclaim Heinrich – Madiel. In the room where they have now taken up quarters mysterious noises can be made out – through these, the spirits relate that Heinrich will now enter the house, but no-one comes. The bookseller Jakob Glock arranges for Ruprecht to visit the famous sorcerer Agrippa von Nettesheim, from whom the knight attempts to learn the secrets of magic.

Act III
Outside Count Heinrich's house, Renata in vain begs to be admitted. Ruprecht returns from Agrippa. Renata demands that the knight challenges the Count who has insulted her to a duel and kill him. Upon seeing Heinrich on the balcony, the heroine again perceives him to be a fiery angel. During the duel, Ruprecht – whom Renata at the very last minute forbade to attack Heinrich – is seriously wounded. Raving, he imagines the laughter of the redskins against whom he fought in America.

Act IV
As soon as Ruprecht's condition improves, Renata declares to him that their relationship cannot continue no longer and that she intends to shut herself away in a convent. Ruprecht goes to the tavern to drown his sorrows and meets Dr Faust and his friend Mephistopheles who are travelling across Europe and who invite the knight to join them on their journey.

Act V
The Inquisitor arrives at the convent to exorcise the demons: ever since Sister Renata came here, the nuns have been possessed by evil spirits. During the exorcism a Bacchanalia begins: some of the sisters call Renata a saint, while others almost rip the Inquisitor to shreds, declaring him to be a myrmidon of Hell. Mephistopheles brings Ruprecht to the convent and shows him what has happened to Renata. The Inquisitor condemns her to be burnt at the stake.

If one were to read the libretto of The Fiery Angel "in isolation", then one would be left facing a peculiar story about life in the Middle Ages, a story with no beginning and no end: there is a woman who has visions of demons, she involves a knight who has fallen in love with her in her misadventures, but she is burnt at the stake as a witch and the fate of the knight is unresolved. Of course, there is no opera that can be simplified to just the text of its libretto – an opera must be listened to – but even the music of The Fiery Angel is something of a paradox.

The opera's characters are in a constant state of tension trying to understand whether or not demons actually exist and how they should be dealt with, at the same time not surrendering themselves to the omnipresent inquisition, not destroying themselves and those they love – and are the latter, in fact, deserving of that love? This tension constantly breaks out in the music: it could not be said that Prokofiev's musical language is radical, although The Fiery Angel remains one of the most demanding operas of the 20th century, for both the performers and the audience.

On the other hand, however powerful the spirits of Hell may be concerning the actions of the protagonists, with Prokofiev the evil remains unreal and carnival-like: the music walks a constant tightrope between drama and farce, between "true opera" in the spirit of late romanticism and a merry parody of the latter. Take, for example, the final scene where the nuns almost rip the Inquisitor to pieces, calling him the Devil and demanding he show his tail, while other sisters sing "La-la-la". It is true that it is not easy to listen to all of this: Prokofiev split the chorus into six sections, and it would be hard to imagine such an impressive Bacchanalia in another opera. The Fiery Angel is also one of the most striking operas of the last century.

The scene of the mysterious knocking, the speaking skeletons and Mephistopheles who unexpectedly sings in a tenor voice – all of these are old operatic props, merely highlighted by the use of the unprecedented musical colours. The irony of the distanced observer and the lack of a moral in the finale – this creates an anti-romantic stance. Possessed by her visions, Renata must ascend the bonfire, and tragedy almost occurs, but suddenly everything stops (Prokofiev rejected the dénouement in the literary source, Valery Bryusov's novel) and one can hear fanfares with the final chord in dazzling major key.

To this day, The Fiery Angel has lost none of its power – in some episodes it is hard to believe that this opera was written almost a century ago – and the issues Prokofiev raises about faith and lack of faith remain as current as they have ever been. And the production, staged by Valery Gergiev and director David Freeman, having created an international sensation in 1991, remains the finest interpretation of this opera. Freeman took radical decisions – he staged everything in line with the composer's comments and remarks. And he also added a certain detail: he constrained the real characters within the centre of the stage, and he transformed the hosts of the stage into a pack of voiceless white beings. A great privilege in a materialistic age: now these little demons can haunt us, too. Bogdan Korolyok