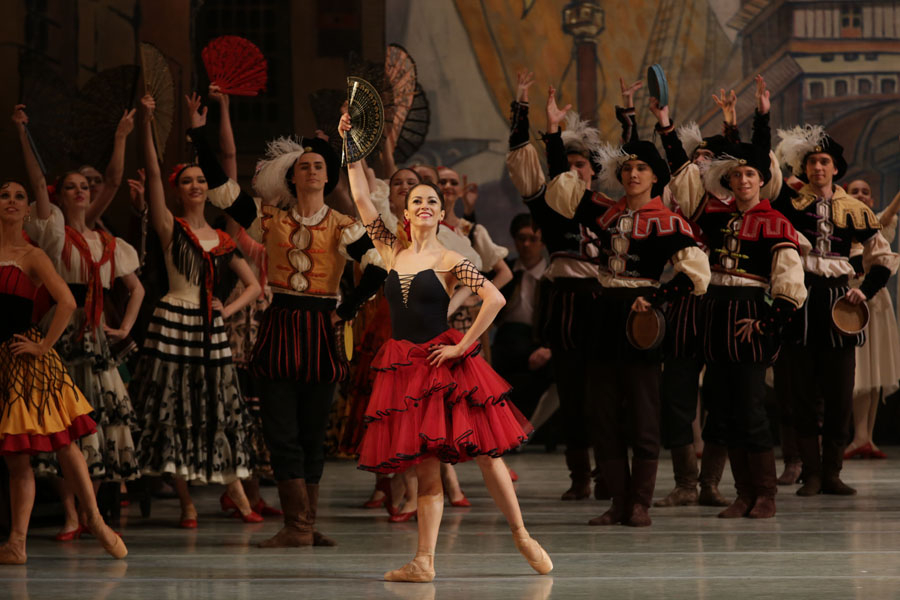 ballet by Alexander Gorsky set to music by Ludwig Minkus
Performance has been rescheduled from April 25, 2020

Prologue
Having read some tales of chivalry, Don Quixote decides to set out in search of adventures. It occurs to him to make his servant Sancho Panza his armour-bearer.

Act I
Scene 1
In front of Lorenzo’s inn in Barcelona, a holiday crowd has gathered. Also there are Kitri, the flirtatious daughter of the innkeeper, and her lover Basilio, the barber. Lorenzo does not like the poor barber. The rich nobleman Gamache, who wants to marry Kitri, is more fit for his daughter.
The crowd welcomes a street dancer and the famous toreador Espada. At the appearance of an extraordinary-looking horseman, the people are struck with astonishment. Lorenzo welcomes Don Quixote courteously and invites him to partake of some refreshment. The girls seize the opportunity to have a bit of fun by playing tricks on fat Sancho Panza.
The knight sees Kitri and is struck by her beauty. Is it not she who has haunted his dreams as the beautiful Dulcinea?

Act II
Scene 2
Fleeing from Lorenzo and Gamache, the two lovers, Kitri and Basilio, wander into a gypsy camp. Soon Don Quixote appears in the camp. The gypsies invite Don Quixote to attend a play they are about to perform. Don Quixote follows the performance with rapt attention and, forgetting it is theatre, defend those who need his protection. Catching sight of the windmills, he mistakes them for evil magicians whom he has to hit. Don Quixote attacks the windmill.

Scene 3
Don Quixote, who has fallen asleep, is haunted by visions: he is in the beautiful Kingdom of the Dryads. Among them is Kitri, who has assumed the form of Dulcinea.

Scene 4
Morning breaks and Kitri and Basilio wake up only just in time, for Lorenzo and Gamache are close upon them. The lovers flee. Don Quixote, their protector, sends Lorenzo and Gamache on a false trail, but Sancho Panza corrects his master’s “mistake”. The chase goes on.

Act III
Scene 5
People are gathering for a fiesta at an inn. Among them Kitri and Basil. Lorenzo overtakes the lovers. Kitri's husband must become Gamache. Basil plays the suicide scene. Kitri begs Don Quixote to persuade his father to fulfill Basil's death request – to give their love his blessing. Lorenzo blesses the lovers. The very next instant, Basilio jumps to his feet.

Scene 6
The wedding of Kitri and Basil. Don Quixote is the guest of honour. Wishing the newly-weds every happiness, the knight-errant departs in search of new adventures.

Don Quixote, our legacy of the golden age of classical ballet, is a poignant example of how Spain is portrayed in ballets with its whirlwind ensemble dancing, castanets, fans, polka dot skirts, roses and decorative combs in  women’s hairdos.
Despite its name, the ballet is not an adaptation of Miguel de Cervantes’ novel. Only one episode of the ingenious hidalgo’s many adventures serves as the basis for the story and the dancing scenes. It is a story about the failed wedding of the wealthy Camacho (Gamache in the ballet) to the fair Quiteria (Kitri in the ballet), who is also the object of affections of the villager Basil (Basilio). However, Don Quixote is in no way the lead character in the story by the ballet standards. His role is mostly that of a pantomime artist or a stage walker, while all the dancing feats are accomplished by other characters.
This festive, hot-tempered and virtuoso ballet was staged in 1900 (and transferred from the Bolshoi Theatre in Moscow to the Mariinsky Theatre in 1902) by Alexander Gorsky after the eponymous ballet of Marius Petipa, which had graced the St Petersburg stage from 1871. The young and passionate choreographer Gorsky was heavily influenced by Stanislavski (who had just opened the Moscow Art Theatre) at the beginning of the 20th century. To make the ballet more ‘lifelike and truthful’ he turned the symmetrical corps de ballets, so common in his renowned colleague Petipa’s works, into a playful, lively, and cheerful crowd. The first spectators recalled, ‘the lively and passionate crowd in the square makes you believe up to a point of delusion in the sun, which makes you fall in love so keenly, tease each other, chase after the running beauty, who hides behind her fan…’
Gorsky kept the contours of the libretto, the music written by Minkus for Petipa, and many of the choreographic pieces for his production. However, Gorsky rearranged some of the scenes of the existing production.
The modern Don Quixote arguably features the most diverse dances from among the ballet repertory: one can still see the echoes of Marius Petipa, Alexander Gorsky, Fyodor Lopukhov, who created the ‘folkloresque’ Spanish fandango in 1923, and Nina Anisimova, who added her version of the gypsy dance in 1946. Moreover, many of those dancers who performed the role of Basilio can be considered co-choreographers for the main character. On many occasions did their tricks and  ideas aimed at showcasing the artist himself in full glory make their way into the variations. For soloists, Don Quixote is not just a measure of virtuosity, but also an opportunity to be in the midst of a game, where even the smallest of roles might blossom into a colourful humoristic touch. For spectators, this production, featuring in equal measure genre and everyday scenes, character choreography and pure classical elements, is pure charm due to its generous serving of dancing and the atmosphere of carefree festivity.
Olga Makarova