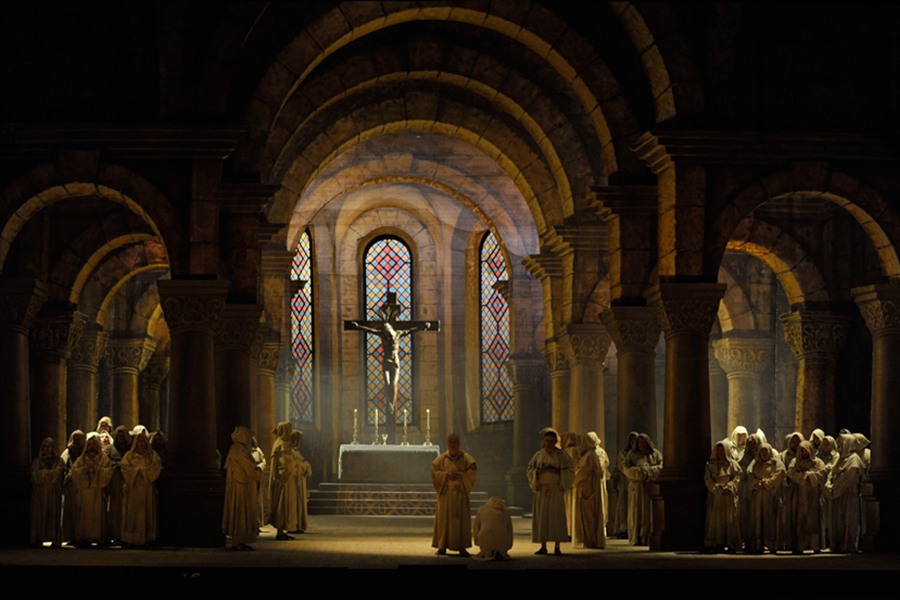 Act I
In the castle of the Marchese di Culatravu in Seville. The Marchese is bidding Leonora, his daughter, good night. After he departs, Leonora admits to Curra, her cliambermaid, that she has promised to elope with Alvaro that very night, only is now undecided. She knows that her father, the Marchese, will never give his consent to their marriage, for Alvaro is the sole survivor of a family of pro-lnca noblemen exterminated for struggling against the Spanish colonial overlords. Alvaro appears in the room, entering through the balcony. With great difficulty, he persuades Leonora to run away with him. They are interrupted by the appearance of her father, who is armed and accompanied by two servants. Alvaro is prepared to die at the hands of the outraged Marchese, but instead of killing him, the Marchese orders his servants to sei/e Alvaro. Forced to defend himself, Alvaro draws a pistol. Unable to use the gun against the father of the one he loves, however, he throws it to the ground. The pistol falls to the floor and discharges on im pact. The Marchese is mortally wounded and dies cursing his daughter. Leonora faints and Alvaro runs away.

Act II
Several months later. Leonora is disguised as a man, a muleteer's assistant. She finds herself in the village of llornachuelos, where peasant festivities are under way, and recognises one of the guests as her brother Carlo. Carlo is seeking to avenge the honour of his family under the guise of Pereda, a student in search of his sister and her lover. Pre/iosilla, a gypsy girl, tells the fortunes of those who are present and predicts imminent war with Austria. She calls on everyone to go to Italy and join the army. At the sight of Pereda, Prexiosilla casts doubts on his identity and foretells him a terrible fate. Leonora prays to be delivered from her brother's vengeful fury. Carlo tries but fails to learn from Trabuco,a muleteer,the identity of the silent companion who is staying away from the festivities. The elderly Alcalde suggests that the student reveal who he really is. Carlo is allusive and refers to himself as a friend of the Marchese's son. To Leonora's dismay, he tells the story of the killing of the Marehese di Calatrava and his son's thirst for revenge. Toward evening, the events continue near the Monastery of Our Lady of the Angels. Leonora is tired ajid still dressed as a man. She sings of her desperation and her hope of finding peace of mind in the monastery, where she intends to spend what is left of her life in penance for her sins. The Father Superior (Padre Guardiano) agrees to allow Leonora to remain in a nearby cave. He pronounces a general curse on anyone visiting the cave or speaking to the anchorite, who is only allowed to eat whatever he himself takes to feed her. As a last resort, the hermit may call for help by ringing a bell.

Act III
A Spanish army camp near Velletrijtaly. Several years have passed and Alvaro is serving in the Spanish army as a captain. Under the alias of Don Federico Herrero, he has won fame for his outstanding valour. Alvaro reflects on his misfortunes while thinking of Leonora, whose soul he assumes to be in heaven. The sound of a quarrel brings him running to the rescue of an unknown officer whose life is being threatened by gamblers. The officer is none other than Carlo, still on Alvaro's trail. Carlo introduces himself as Don Felice de Bornos. The two do not recognise each other and, in exchange for having saved his life,Carlo solemnly swears friendship to Alvaro.
The battle now flares up again. Alvaro is badly wounded and is rescued by his new friend. The surgeon who is about to extract the bullet is uncertain as to the outcome of the operation. To encourage his friend on the brink of death, Carlo promises to have him appointed a Knight of Calatrava. This name leads to an angry outburst from Alvaro. Alvaro entrusts Carlo with the key to his purse, where his friend will find a letter to be destroyed in the event of Alvaro's death.
Carlo is surprised and disturbed at his friend's angry reaction to the name of Calatrava. Resisting the urge to read the letter. Carlo opens the purse and finds a portrait of Leonora. Alvaro's identity is revealed. Carlo is glad that the operations has been successful, as his enemy is alive and he now has thechance of revenge.
A military camp near Velletri. The night watch passes by. Morning is approaching. The camp stirs. The soldiers are drinking and having fun gambling, among them the gypsy girl Preziosilla who forecasts success for all. Travelling salesmen offer their wares, beggars and their children plead for alms, the recruits bemoan their bitter fate and Fra Melitone threatens the sinners with God's wrath. All are united by Preziosilla's call to fight for their native land.
Alvaro makes a complete recovery and is amazed to learn that Carlo has challenged him to a duel. At this point, Alvaro learns that Leonora is still alive. When he hears that Carlo intends to kill his sister, he immediately takes up the challenge. Believing that he has killed his friend in the duel, Alvaro throws himself into battle, hoping to die.

Act IV
Some five years later, outside the Monastery of Our Lady of the Angels. Fra Melitone is distributing food to the poor. The beggars lament the absence of Padre Rafaello, who can no longer serve them due to the severity of his penitence and his troubled spirit. Carlo, who was left unconscious during the duel, appears and asks to speak to Padre Rafaello. Summoned by the gatekeeper, Padre Rafaello turns out to be none other than Alvaro. Carlo accuses Alvaro of cowardice and Alvaro is goaded into taking up arms again. They choose as the sight of their duel the spot right in front of the cave where Leonora is living in refuge. Carlo is mortally wounded in the duel. Seeking a confessor for the dying man, Alvaro decides to turn to the mystery hermit. Leonora rings the bell to obtain help from the monastery. She then recognizes Alvaro and the identity of his opponent. Leonora runs out to her dying brother, who stabs her when she tries to embrace him. The monks running in answer to the bell arrive to find Alvaro in the act of suicide, cursing all humanity.